Mark Dredge is one of the UK’s most respected beer writers. His latest book, The Best Beer in the World, sees him voyage across the globe in search of the perfect pint. Part beer encyclopaedia, part travel guide, it’s essential reading for anyone looking to make friends with a decent ale in a new country.

One of the early contenders for Mark’s award of ‘Best Beer in the World’ is an Italian brew, Tipopils, which we’ve decided to make Beer of the Week. But rather than have us chunter on about how great it is, we thought it would be much more interesting to hear what Mark has to say about it. So we asked him some questions about Tipopils, the book and some beer recommendations closer to home…

Before starting your hunt for the best beer in the world you identified Tipopils as a possible contender. How would you describe the beer?
Tipopils is a German-styled Pilsner brewed in north Italy, only it’s a bit different by being dry-hopped for extra aroma. To me, it has a magic quality about it, a lightness yet a fullness of flavour, a brilliant aroma yet something that you don’t get bored of. I’m a big fan of lagers in general, something that many drinkers sneer at thinking they’re boring, and I’ve always loved drinking the beer, so picked it out as a contender based on that. Plus its place in beer’s history: golden lager is the biggest-selling beer type in the world, so it’s relevant for that reason, but Tipopils makes it modern and interesting and exciting. I thought before beginning my search that any beer I could call ‘the best’ had to have a relevant place in the history of beer and not just be a great one-off experience of a beer.

You visited the brewery as part of the book research. Did seeing it being made, and drinking it fresh, increase your appreciation of the beer?
Absolutely. I got to talk to Agostino, the brewmaster, and learn the story of the beer directly from him. He told me the name meant ‘a kind of a pilsner’, a reference to it being his own take on the style. And I didn’t realise that it essentially created Italy’s first beer style, the Italian Pilsner. The distinctive quality of an Italian Pilsner is that it’s dry-hopped, meaning hops are added into the conditioning tank and give it loads of extra aroma. It was also fascinating to hear how Agostino learned to brew this beer, and that he basically homebrewed the same recipe for a decade before starting his professional brewery. As for drinking it… you can’t beat drinking the beer in the place that it’s made. You pick up the atmosphere and emotion of the place very directly and I love that.

There are a lot of new, exciting breweries springing up all over Italy, which seems unlikely in a country with such little beer heritage. Why do you think the Italians have caught the brewing bug and why are they so good at it?
An Italian friend once told me that part of the growth was due to young Italians turning away from wine because it’s what their  parents drink – they wanted to drink something different. Before the 1990s, even the early 2000s, their beer culture was non-existent compared to other European countries but this meant there were no rules that they had to follow, no expectations; they could do what they wanted and they took inspiration from England, Germany, Belgium and America, plus their own wine and food culture, to create some really interesting drinks. And we all know how good the Italians are at food and combining simple ingredients to create delicious dishes, and this just transferred from kitchen to brewery. One other possibly significant thing is that more than most other cultures, the Italians have a palate that enjoys bitterness, whether it’s espresso, bitter salad leaves or bitter spirits like Aperol or Campari, so beer’s hoppy side naturally fits.

What surprised you most about any of the other countries and breweries you visited?
That good beer is everywhere. Everywhere you go has their local lagers, but search a bit harder and you’ll find small breweries and brewpubs making a huge variety of different beers. It’s amazing. Two of the best IPAs I drank in the last year were brewed in Beijing and Blumenau, a small southern Brazilian town. I drank perfect replica Czech Pilsners in Hanoi.

If you want one answer then the most surprising thing I learned this year was that drinking the wonderful Belgian Trappist beers at the actual monasteries – most of them have adjoining cafés ­– is no fun. I think of dark atmospheric cellars and monastic courtyards but instead the cafés are like the ones you’d find at a National Trust site – bright, local radio playing, serving up tea and cakes. The beers are still amazing, but the locations are incongruous by comparison.

What beers produced closer to home do you particularly enjoy drinking?
I live in East London so I’m surrounded by breweries and bars, which is brilliant, and I tend to drink a few favourite beers most of the time. Right now I’m loving all the FourPure beers, I drink a lot of Camden Town beers (I used to work at the brewery so know them well). Beavertown are great and Howling Hops have a cool tank bar near where I live, which is excellent. Cloudwater have made some of the best British beers I’ve tried this year, Chorlton have some superb sour beers, St Austell have been a big surprise this year, Northern Monk are making ace beers, as are Vocation Brewing – it’s an exciting time to love beer in Britain and now I’m back from lots of travel it’s time for me to drink more local beers and see what I’ve been missing closer to home!

Has putting the book together changed your appreciation of beer?
It’s certainly changed my appreciation of drinking cultures and how everywhere you go has a different relationship to beer. Related to that, and something I hope the book makes clear, is that culturally we drink different beers in different ways. I went to Vietnam to drink their fresh, local lagers. To many Vietnamese that’s all they know of as beer – a light, refreshing rice lager. They’ve never had hoppy American IPAs or rich Belgian ales, so they don’t have these beers as a point of reference – their ‘best beer’ is a fresh local one. We need to adjust our expectations when we travel because we can’t compare every beer we drink with the most fully-flavoured beer we’ve ever had.

The best lesson I learned came at the original Budweiser brewery in St Louis. Budweiser, and the Anheuser-Busch brewery, is a very important story, which I wanted to tell. In terms of the liquid, it’s not deemed to be especially delicious and people say it’s boring, or whatever. But the reality is that Budweiser is a very specific beer with a very exact flavour profile (whether you like that flavour or not). What’s remarkable is that they can brew the beer to taste exactly the same every single time, wherever it’s brewed in the world. Technically Budweiser is a perfect beer because every single brew is exactly what the perfect version of Budweiser should be like. Great beer doesn’t always necessarily mean the most exciting to taste.

You’re keen to point out that the environment in which you drink a beer plays a large part in determining how much you enjoy it. What would be the best environment in which to enjoy a glass of Tipopils?
Place and people are so important. I’ve drunk wonderful beers on my own, but those beers are always far more enjoyable when shared with others. The beauty of Tipopils is that it’s great in the bottle, so the best environment could simply be at home with freshly cooked pizza and a few friends, but given a choice I’d go back to the brewery with my girlfriend and sit in the bar and have glass after glass of fresh golden lager, followed by good food and a few more of the excellent Italiano beers. 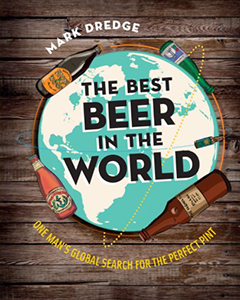 Mark Dredge’s excellent book, ‘The Best Beer in the World – One man’s global search for the perfect pint’ is available in all good book shops and from amazon.