What does a hard working rock n roll band do when it has built up a loyal fan base, shifted a few records and toured the world? These days it would seem the answer is to find a brewery willing to help them with a collaboration beer. Everyone’s at it. Only last month we were chatting with Francis Rossi from Status Quo about the denim rockers’ newly launched beer and cider. Sir Paul McCartney got in on the act earlier this year with the fungally monikered ‘Old Stinkhorn’ ale. Iron Maiden has been peddling ‘Trooper’ for years while mournful wailers Elbow sob into pints of their own brew ‘Build a Rocket Boys!’ And even cheese-larynxed boy-band-of-brothers Hanson grew up and started a brewery, creatively called Mmmhops.

But for this week’s beery choice we’ve been supping on a far heavier beast than any of those lightweights can muster. We’ve been dipping our trembling lips into the hop-laden wares of Swedish heavy metal prog rockers Opeth* and their Communion Pale Ale, brewed by Leeds’ mighty Northern Monk Brew Co. And this team has form, having produced an Imperial Stout together last year.

According to Northern Monk’s brewery director Russell Bisset, the brief for this booze was simple: “The best kind of beer to accompany a gig. A 5.1% hoppy pale was the resounding victor in a vote held by team Monk and team Opeth”.

Rather than recreate a heavy metal gig atmosphere in my living room (the dogs aren’t fans of the genre) I chose to give this a trial in a similarly fevered but less guitar-heavy atmosphere: watching England cock up a game of football with a bunch of noisy mates. And, unlike the white shirted ball-kickers, the golden cans were a resounding success.

The beer is packed to the rafters with citra hops, giving it their trademark refreshing citric aroma and bite. It has a decent bit of fruit and maltiness and the punchy bitterness is offset by a soft feel in the mouth (don’t tell the Opeth boys their beer is soft). Citra powered pale ales may well be all the rage, but I’m not sure I’ve had one quite like this before. It is simultaneously light, but full of body; it’s juicy, spicy and effortlessly drinkable. And it didn’t last long.

Most brewery-plus-rockstar collaborations fall a little flat. Perhaps the excesses of rock-n-roll touring lead to knackered taste buds. So it’s not much of a claim to announce this as the best rock-n-roll booze I’ve ever had. But until Opeth and Northern Monk come up with their next beer brief I would be surprised if this one can be bettered.

The beer is available exclusively from online retailers Honest Brew and comes in nattily packed 3-can ‘growlers’. To find out more about the beer they’ve published an interview with the brewery. Thanks to Sophie for sorting me out with my samples.

*I’m not usually one for heavy metal, but have been known to plug in some prog rock albums. I’ve been listening to their music while writing this and found myself quite enjoying it. Until I reached some gutteral growling and leaped to The Carpenters Greatest Hits to supply the antidote. Sorry lads… 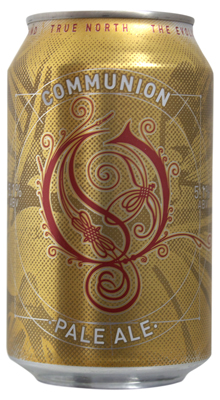