Rejoice! We have reached our one hundredth beer of the week review. 100 beers studied, guzzled and written about without skipping a week (despite Rich’s best efforts at lateness*).

To celebrate this three-figure milestone we’ve popped open one of the most extraordinary beers on the planet – an imperial stout lovingly crafted by one of our favourite breweries, Sweden’s Omnipollo.

We started this series of features with another dark beer, Otley Porter, and have slurped and supped our way through numerous beers styles from old and new breweries all over the world. And each one of them has been great. Even the one we made ourselves from a kit, and even the one brewed by boffins.

On occasions we’ve shared tasting duties with some of the beer industries most respected writers – such as Mark Dredge and Tim Hampson – and our less respected mates Larry and Rory. We’ve opened bottles adorned with ostrichs, pipe smoking monkeys and apes wearing space suits.

We’ve found the best beers for Thai food, Japanese curries and plates of Belgian sausages, and we’ve tasted booze made with chillis, Scottish desserts and toast. And this week we’re drinking one that includes pecan nuts, has been aged in Islay and Cognac barrels and weighs in at a hair-curling 11%.

Thanks to this high alcohol content and luxurious texture, it tastes a bit like a beery cream liqueur. It’s thick and black, instantly producing a head of honeycomb which fizzes and slides around the surface before quickly departing to leave behind smoky, ghostly whisps.

From the first sip there’s a bust-up of flavours, with coffee, sweet cream, chocolate, toasted nuts and a burst of sour, stoned fruit being the main protagonists. It’s a boozy mash-up of stout, sherry, Belgian sour and whisky cream liqueur and, as a result, is sensationally unique.

You might think these descriptions make it sound like an unhinged mess. But it’s not. It’s a celebration of beer and the amazing diversity that contemporary brewers are able to achieve from a recipe starting point that is thousands of years old. As such, we think it makes and apt toast to the vast array of 100 beers we’ve described over the past few years. Cheers! 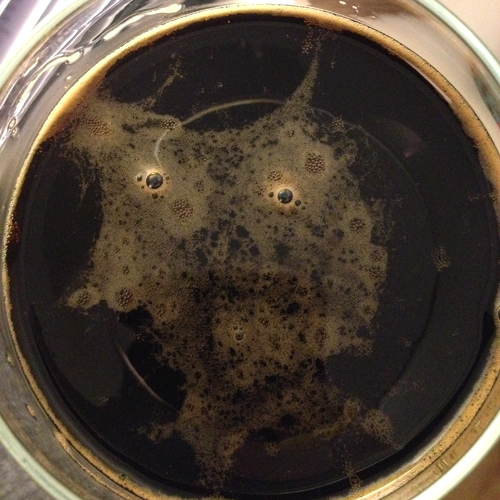 *Now that we’ve reached this century of beer reviews we’re going to change things a little. We will be less rigid about reviewing a beer every week (much to Rich’s relief) and we’re going to add the occasional cider review to our repertoire (which we will call ‘cider of the week’ for obvious reasons)