We consider ourselves generous folk. People send us stuff and, in turn, we like to share the spoils with our friends.

Take, for example, my recent good fortune at receiving a four-pack of beer from Yorkshire brewery BAD Co. Their beers, each with a rock music moniker, are highly thought of. I could’ve guzzled them all myself. But, no, not me. I took the box up to the recently held Frocester Beer Festival and gave a bottle each to three of my pals as a take-home cure for the post festival blues.

The brewery’s PR team were keen to get my feedback on their booze, but I think that through this act of generosity I’m offering them a more rounded view of their output by inviting my haggard old beer drinking chums to share their thoughts. I hope they don’t mind.

And to keep the spirit of sharing rolling along, I am now publishing their feedback with you, our website readers. Some might like to call this ‘lazily passing on responsibility”. But they may simply be envious of missing out on the spoils.*

Here, then, are the four BAD beers, as tasted by me and my festival pals, and some notes on our own rock-n-roll, beer induced, festival BAD boy behavour… 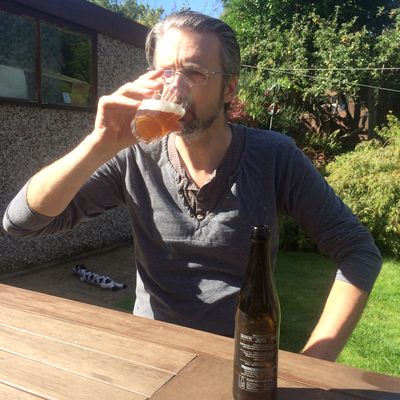 The music: A superb song by Talking Heads on their album ‘Speaking in Tongues’ (one of my all time favourites). Its full title is ‘I Get Wild/Wild Gravity’ and the lyrics are full of lines that could come from someone who has partaken in one too many ales. Such as “It’s hard to hold on to the ground”, “I get up, climbing out, how did I get home?” and “A place there where everything spins.” I feel drunk just writing them down.

BAD boy antics: A beer festival veteran, Larry is always very well behaved. But he is the holder of the record for “most hog roast rolls consumed in one day.” No-one can remember how many he had, but it was approaching double figures. This year he ate none. Change of caterers.

The verdict: Larry poured his beer after a “30k bike ride in glorious bright sunshine”. Blimey. Perhaps there’s another reason he’s stopped eating hog roasts. He went on to say “the most noticeable aroma was that of pineapple and bitterness. First taste was cool and refreshing. It has a punch to the flavour, if I’m honest a little too much for my liking, but having said that the 330ml bottle disappeared quicker than I was expecting so it can’t have been that bad. Overall a little too hoppy and malty to have more than a few whilst lounging watching the grass not cut itself, but pair it up with an ‘in your face’ meal and it would hold its own nicely.” 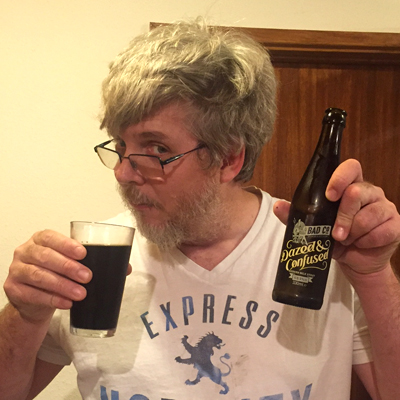 The music: Originally a song by Jake Holmes. The most famous version was recorded by Led Zeppelin on their debut album, which Jimmy Page tinkered with, crediting only himself. Holmes filed a lawsuit in 2010 and got an ‘inspired by’ credit on a 2012 live album.** The brewery describe this beer as having “complex flavours with an easy drinking character” perhaps insinuating that the 5.5% booze and easy drinking nature of a traditionally heavy beer might leave the drinker both dazed and confused?

BAD boy antics: This was his third beer festival. Last year he made a makeshift bed out of two camping chairs and had a nap during one of the band’s sets. This year he stayed awake and took part in some undignified moshing. Good lad.

The verdict: Rory chilled his beer in a wine fridge for several days before opening. “It poured nicely. Dark, though with scant head produced. Perhaps my pouring technique needs work.” And what about the taste? “Astonishing!” Hurrah! He went on to praise it for being “almost lager-like in it’s lightness. A smooth and gentle beer which does not assault the senses. Plus my wife liked it, too!” How much of that sensual revelation is down to the wine fridge, we’re not sure, but hopefully it’s enough to persuade Rory’s wife to allow a little more room in the wine fridge for beer. 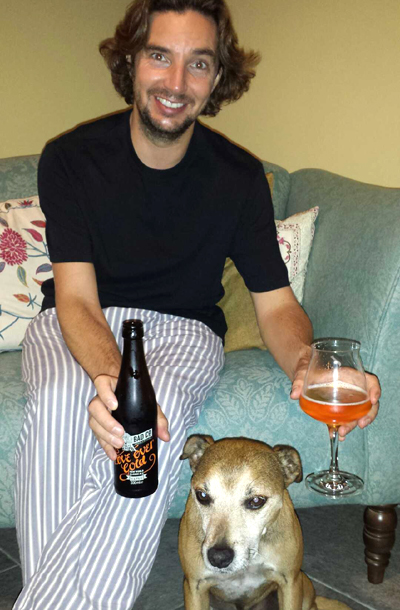 The music: Named after dad-rock favourites Dire Straits’ fourth studio album, a record that kicks off with the 14 minute meandering classic ‘Telegraph Road’. Earlier this year, Joseph Knopfler, son of songwriting frontman Mark, released his own booze, ‘Pedrino’, a blend of sherry and tonic water.

BAD boy antics: Adam made his Frocester debut last year and went home with an inflatable doll, previously owned by a festival-going hen party. This year he made the amateurish error of having a couple of afternoon pints of local cider. The delay in writing this blog is as a result of a three-week sobering up period before he could tackle the beer (but he was still not well enough to abandon the comforts of his pyjamas).

The verdict: Being more familiar with the new craft beer scene than Larry or Rory, the New-World hoppiness was much less of a surprise to Adam. “I get the grapefruit notes coming through and the bitter note at the end” he commented, although he cast some doubts on the bottle’s claims of being “bold and fearless.” He qualified this by adding “because it’s mellow I actually think it’s more sophisticated than those ales that try and punch your taste buds in.” The dog’s tasting notes were not available. 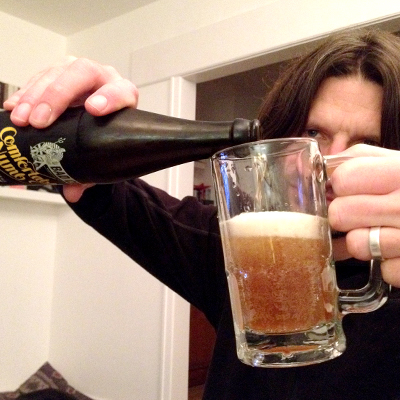 The music: Comfortably Numb is a song from concept album ‘The Wall’ by Pink Floyd and is notable for its noodly guitar solos. ‘The Wall’ was later made into a movie starring Bob Geldof and features all sorts of hallucinogenic nonsense.

BAD boy antics: FBF stalwart Nick has behaved impeccably since an unfortunate incident with old school mate Martyn’s homemade wine in the late 1990s. Thankfully it’s now impossible to sneak any booze past the festival security staff, and Martyn hasn’t been seen since, enabling Nick to take up the role of shepherd, steering his flock of festival friends away from too much harm.

The verdict: Sneaky Nick made sure he kept the lowest strength beer for himself to ease his way up to drinking speed following the inevitable end-of-festival crash. Despite dipping below 4% he was impressed with the flavour, commenting “it smells of mango, with an initial taste of the tropics met by a surge of aggressive dry bitterness. So while my nose is alighting on a Caribbean island, my tongue is being violently beaten in a dusty Leeds alley.” But he actually thinks this is a good thing. “It all works rather well. Light body, nicely gluggable, and superb hop flavours with a complexity that builds through every mouthful.” Music to a craft beer fan’s ears.

A decent four-pronged performance from BAD Brewery, impressing not only those of us who regularly drink modern, hop-forward beers, but also going down well with the traditionalists in our group. Our applause is worthy of an encore, adding to the praise the brewery is already receiving. We would also suggest they shift a few beers to Frocester’s Festival next year – we can guarantee at least four takers.***

*Note: Rich didn’t receive a bottle from me. That’s because he failed to attend this year’s festival.

**Sketchy details from Wikipedia. Led Zeppelin employ good lawyers. If I’ve got something wrong, let me know and I’ll change it. Two Thirsty Gardeners vs Led Zeppelin in court would be a huge mismatch.