Everyone knows that beer and cider are the world’s greatest boozes. It is indisputable fact. But what comes in third is very much up for grabs.

I insist the answer is whisky. Like the best beer it starts with good grain, before craftsmen, nature and time set to work on it, creating an infinite number of intoxicating drinks with subtly shifting flavours that never fail to raise the spirits or warm the soul. Strangely, Rich isn’t much of a whisky fan, electing wine in his number three slot instead.

So when we heard the Scotch Malt Whisky Society had teamed up with top psychologist and research scientist Dr Adam Moore (pictured) to create a ‘flavour behaviour test’ to show how personality can link to whisky preference, it was me who leaped online to fill in the short questionnaire.

We managed to catch up with Dr Adam to ask him a few questions about the profiling, but first I had to see how successful my own results turned out to be. I’ve always sought peaty whiskies when given the opportunity, appreciating their unique smoky character that’s distinctly different from any other kind of booze. So when I was told I should be looking at ‘juicy, oaky and vanilla’ whiskies instead, I was a little surprised.

On the recommendation of the Scotch Malt Whisky Society I got hold of a bottle of a 25 year old Speyside that promised ‘musky, floral and sweet perfumes’. And it’s sensational. At a whopping 55.1% ABV it instantly widened my eyes and lengthened my grin, and was subsequently diluted with a splash of water, which I’ve heard also brings out more of the aroma – particularly useful for those floral notes. It’s complex and full of flavour with not a hint of aggressive burn, and you can detect a touch of honey sweetness soothing the newly invigorated senses while a wandering mind starts recalling fresh, Scottish mountain air. It’s winter-fruit juicy and ginger-spicy and was quickly becoming a new favourite evening companion.

I’m not going to ditch the peat but will definitely keep an eye out for more whiskies in the juicy, oak and vanilla category. Happy with my results, it was time to quiz Dr Adam on a job well done…

Why did you decide to undertake this research into whisky taste preferences?
The Scotch Malt Whisky Society approached me to research the topic and I thought it was really interesting. I didn’t know of anyone who’d tried something like this before

Has this type of research taken place in other areas of the food and drinks business?
There has been research into how much people eat, of course, and what types of foods (i.e. sweet, salty, etc.) they are likely to prefer on an ongoing basis. There has also been research into what sorts of menu choices and advertisements will elicit preferences/choices for certain types of food(s). But there hasn’t been anything quite like Flavour Behaviour and what we’re doing.

Were you surprised at how well you were able to match personality with whisky preference?
Yes. When you think about how complex whisky is, how many different options/choices there are, and then you factor in each person’s individual experience/journey through that world, it is really something to be able to accurately predict things they will like without really knowing anything else about them besides basic personality.

Did you notice any differences in personality and preferences within different countries?
No, and I wouldn’t have expected to find something like that anyway. Personality is a human universal – it works pretty much the same way regardless of where you live. So the consistency of relationships across countries was right in line with decades of previous psychological research.

What are some of the key flavour profiles within whisky than changed according to personality?
The Scotch Malt Whisky Society promotes its whisky according to 12 flavour key profiles (rather than by traditional regional categories) and the Spicy & Dry flavour profile seemed to have links to multiple personality traits, and to vary widely between being preferred to being disliked, depending on the trait or combination of traits. There were others that were also linked to personality traits, of course, but that one seemed to have the most links to various traits.

Have you taken the test yourself? What were the results and did you like the whisky style it came up with?
I haven’t because I built it, and I know what my personality profile is, so I know what would be recommended for me. There were two recommendations for me (since I have two personality traits tied for strongest), and one I knew I liked. The other I didn’t know much about, but have very much enjoyed trying it out!

Are you planning on developing this research even further?
The findings of the Flavour Behaviour test are yet to be analysed fully – depending on what data we find, we may look to explore this topic further

And finally, Thirsty Rich isn’t much of a whisky drinker. He’s a grumpy man, preferring to sit alone in his shed with a pint of cider than go out socialising. Is there a whisky out there that might convert him?
Just from that I’d say Old and Dignified sounds about right… Then again, to convert him, maybe he should try Young and Spritely?!

To find a whisky style to match your personality, visit www.Flavourbehaviour.com

For more on the Scotch Malt Whisky Society, visit www.smws.com 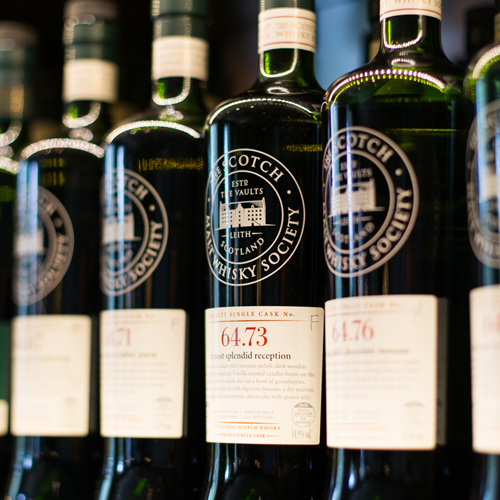