It’s getting to the time of year when we enviously start to notice increasing numbers of prize pumpkins paraded in allotments, shops and aglow through neighbouring windows. Envious, because despite our best efforts, we’ve never quite managed to grow anything more than small, lumpy, misshapen pumpkins that are starting to rot long before they’ve even been cut free from their stems. This makes carving them a near impossibility and eating them a health hazard.

So we decided to find out more about how to grow a beast we can be more proud of and get some tips on carving and cooking them while we’re at it. The best bout of pumpkin action round our way happens at an annual ‘harvest weekend’ at Whitehall Garden Centre in Lacock, so we asked their expert Plant Manager, Jo Morse, for some advice. With a little extra help from our twitter chums…

How to grow pumpkins

Like all veg, it all starts with the right seeds. If size matters, Jo suggests looking out for giant varieties – with Dills Atlantic Giant or Paton Twins Giant being her recommended choices. If good carvability is your preference then try Jack of All Trades. But if dining on the goods is your priority, ace TV botanist James Wong (@Botanygeek) tweeted this advice to us “Pumpkins 4 carvin sadly have rubbish flavor. Try ‘Crown Prince‘ or ‘Queensland Blue‘” while gardening writer Steve Mercer (@stevemercer4) pointed us the way of two of his favourites “Bon Bon and Uchiki Kuri. Always crop reliably and tasty too.”

Whatever variety you opt for, Jo reckons they should be really easy to grow. “They like to be planted in a fertile, well manured site – add well rotted manure to your soil in autumn or February – and really need to be sown indoors in April. Start them off in a 9cm pot in a warm, frost free place and plant out from May, once the frosts have passed. Keep them well watered in hot weather.” And she also has some more tips to maximise size. “As the plant grows, remove all but one pumpkin fruit so all energy gathered by the leaves is focused on the development of one super sized fruit. If two fruits are the same size, choose the one that’s roughly 9ft from the roots and growing along the main stem.”

From there on the key is to keep watering during droughts and, if you’re feeling generous, give them a feed as well. “In July/August, as the nights draw in, it would be a good idea to use a high Potash feed to help with fruit development.”

Apart from the inevitable slug attacks (deal with them how you wish), the most common cause of harm is mildew, for which Jo has an unusual trick up her sleeve. “Spray your pumpkins in June with five parts water and one part full fat milk. It will keep mildew off of them.”

How to carve pumpkins

Assuming you’ve successfully followed this advice your pumpkin patch should be resplendent with handsome fruit. So how best to carve them? Jo has seen plenty of demonically crafted cucurbits in her time and has the following advice: “It would be wise to plan out your design before you start, you can also print off templates from the internet. To start, cut out the top of the pumpkin as a lid, then scoop out all of the insides including seeds and stringy bits. Just remember the more you scrape out, the thinner the walls and the more the pumpkin will glow up like a lantern.” Sharp knives are a vital asset, so she reminds us to “please keep safe when using knives and if carving with kids. It is possible to buy knives that are safe to use and won’t cut fingers and hands.”

How to cook pumpkins

We would hope that a healthy patch churns out more fruit than is required for Halloween festivities, so what do you do with the extra harvest? We surveyed our social media pals to find out what the most popular choices were. Alongside the predictable soup, pie and roast pumpkins we also had an unusually high number of people offering beer and wine as a solution (which says something about the company we keep). Other ideas included bread, cake, hummus and even smoothies, but perhaps the most unusual suggestion came from Grow Your Own magazine editor Lucy Chamberlain (@bramble36) who suggested pumpkin fondue. Caroline Taylor (@AllThatImEating) from the blog All That I’m Eating reminded us to toast the seeds and, sadly, some growers’ pumpkins don’t even make it to the kitchen, using them as fun ‘vegetable bombs’ or even feeding them to the chickens.

But our favourite response came from top TV chef Valentine Warner (@ValentineWarner) who tweeted us a whole recipe “Scoop out pumpkin, make soup with cream chix stock sherry. Heat in and serve from empty shell. Stalk as lid.” We can’t wait til next year to grow and try that one, but for this year we’re off to the shops right now… 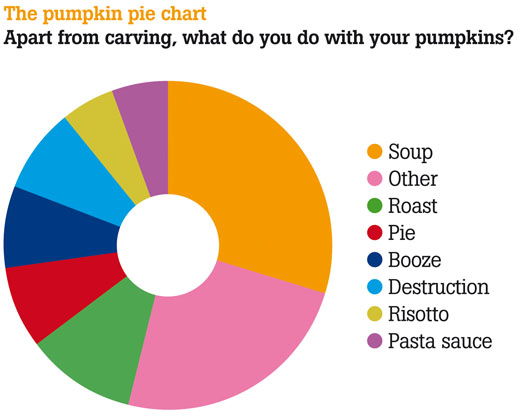