As 2015 slides by on a slick of wet mud, we’re looking back over the year to reveal our most glorious growing successes and miserable vegetable malfunctions. Will we capitalise on the good stuff and learn from the mistakes? Unlikely. But here are those highs and lows anyrate…

Apples
2015 will go down in history as one of the greatest ever years of apple harvesting. Orchards crackled and creaked to the sound of branches warping under the fruity weights and our young trees were no exception. Nick had first pickings from his Lord Lambourne and Keswick Codling trees while Rich pressed his first full batch of allotment cider. Pomme-tastic!

Spinach beet
This super veg, also known as perpetual spinach, overwintered and was merrily chucking out new leaves in early April. Tasty, nutritious and weed-like in its ability to grow, it has become a firm favourite.

Horseradish
We’ve long championed the horseradish over the trendier wasabi.* Having previously confined it to pots Rich finally took the plunge and dug a big pit on the allotment to grow it in. And how it grew. Vast leaves** and long fat roots have been running riot, giving him a steady supply of fiery heat.

Jerusalem artichokes
This winter has been especially windy, inside and out, with the first harvesting of home grown ‘fartichokes‘ under our belts. They’re an incredibly rewarding plant from their giant yellow flowers down to those delicious, knobbly roots.

French beans
While the weather made most legumes a challenge this year, French bean yields were as impressive as ever. Rich boasted a continuous supply of succulent pods while Nick even managed a few meals out of the usually less vigorous borlotti. 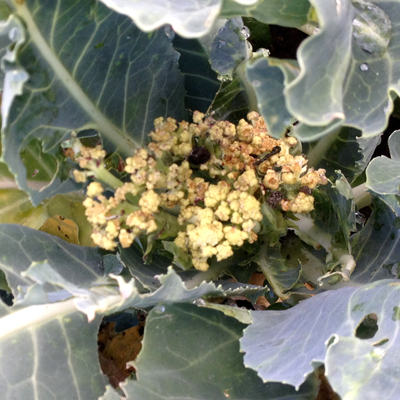 Cauliflower
Every year we try to grow cauliflower. Every year we fail. This time the plants got off to an encouraging start but the tight young curds soon fell apart into gappy brown patches resembling Shane MacGowan’s teeth before the operation…

Pumpkin
While Nick’s spaghetti squash swelled and ripened a treat, Rich’s pumpkins only managed the first part. After a few month’s growth he was dreaming of giant veg triumphs, but while kids up and down the land were merrily carving orange pumpkins for halloween, Rich was sobbing over pasty green specimens which, along with those dreams, withered and died.

Tomatoes
If 2015 was the year of the apple, it was the tomato’s annus horribilis. A cold late summer prevented ripening, hastened the arrival of blight, and up and down the land growers cussed the lack of tomatoey redness. Nick had limited rewards with a few early outdoor plantings that avoided the frost, but the rest were left to the birds.

Broad beans
Until this year we’ve always maintained that black fly are a nuisance but never a big problem, always being easy to manage before causing major damage. This year they destroyed the broad beans. Daily removal, by many methods, was futile and, while the companion planted nasturtiums remained untouched, they even moved over to wreak havoc on the courgettes and runner beans.

Sweetcorn
Nothing compares to the taste of sweetcorn freshly picked from the garden. Sadly Rich is unable to grow them on his allotment (badgers) but Nick has always enjoyed their sweet taste from his back garden. This year, growing them was more of a struggle than normal, but after coaxing them to a decent size he was only able to enjoy two cobs before rodents swept in under the cover of darkness and gobbled the rest.

*Our wasabi didn’t like the hot, dry early part of summer. Having thought it dead, the recent deluge of rain has seen it spring into life again. Horseradish wins.

**The recipe book Nick got for Christmas has some Ukrainian treats that use horseradish leaves. Good to see Ukraine is with us in our horseradish appreciation.