A campaign launched earlier this month is aiming to inspire people across the UK to become ‘Local Heroes’ by taking action to support community growing groups in their neighbourhoods, many of which face a struggle to make ends meet. One of the celebrity backers heading up this fine campaign is Christine Walkden, well-loved broadcaster, writer and champion of no-nonsense gardening. We sit down for a nice cup tea and talk potatoes, plums and prepping for winter.

Christine! Tell me a bit about the Local Heroes campaign, and why you wanted to get involved.
CW. Well, it really epitomises all that I strongly believe in, in relation to getting people growing and gardening and enjoying the outdoors. Most people think gardening and growing and all these sort of environmental things is difficult, it’s not – it’s just doing it and trying it, and if you do it and try it, you will realise you can do it. And there’s nothing like success to breed success. So the Local Heroes campaign for me is all about trying to engage people, and encouraging them to just go out and give it a go. And people think they need skills, they’ve got to come with something that they believe is import. It’s important that you flipping turn up! Just give it a try. Every single one of us has got skills that we don’t know, and that maybe just showing a youngster how to sow a seed, or show how to harvest a bit of fruit, it maybe just telling them what that flipping fruit is. That’s a skill. You may not think that it is, but that’s a skill. The old allotments where people came together and grew – they not only grew plants, but grew themselves.

I get plenty of advice from the old blokes down the allotment, who come wandering over and tell me what I’m doing wrong…
CW. And it’s not written in a book. And that personal advice and that personal contact… that’s where I got a lot of my stuff from as a kid. I had an allotment when I was ten. They just cultivated me. As much as I was cultivating the plants, they were growing me, and their advice, their help… coming over and saying “you don’t do it like that, try this!”

We’re not just talking about City farms are we? There’s community gardens, community orchards, school planting projects – all kinds of gardening schemes that people can get involved with…
CW. Absolutely! What is needed today is for people to just get back and get involved. I think a lot of people are getting isolated, just because of the speed of life and the way we function in life today. Barbara Streisand once sang “people who need people are the luckiest of people” It is true today as it was when it was first sung. And people forget that, and we can’t live in splendid isolation, we don’t function in society like that.

And what should I do if I wanted to get involved locally?
CW. You can go on to the Growing Together Local Heroes website You can look up local horticultural societies, look up your local council website for community projects. Search online for things like ‘community gardening’, ‘guerrilla gardening’, ‘gardening for people’, ‘city farms’. All of these searches will get you in touch with what you need to engage with.

We’re not talking just about the physical act of digging holes are we?
CW. No, no..it’s going and talking, it’s perhaps producing a poster, perhaps it’s going and showing somebody how to make something. How do you make a tied bouquet? There’s lots of people – WI ladies and all the other skilled flower arrangers that are out there and can show you how to make a tied bouquet in seconds. But, “oooh, a tied bouquet, what is that?” You know, you get a bunch of flowers, you wrap them together and hey presto you’ve got it. That’s a skill that can be passed on. We’ve all got skills to share – it can be taking along a camera and showing someone how they can take a better digital photograph. It doesn’t just have to be gardening, it’s society skills. It’s just chatting to somebody. An old person comes along and you chat to them and make them smile and they go away and they feel like they’ve benefited. It’s about growing people as much as growing plants.

OK, so in the spirit of sharing knowledge, I’ve got a top tip for you. I’ve got a banana tree in my back garden that has sprouted, creating a banana grove of trees. It’s aways a pain to protect it from frosts in the winter, but I’ve come up with this great trick. I’ve staked an old beach windbreak around it, and stuffed it with straw. No messing around with bean poles and chicken wire. Wrap it round, hammer in the stakes, cover with tarpaulin, job done!
CW.  Right… there you are. (sounding dubious )

You can have that one for free.
CW.  Thank you…

But… my dahlias. What do I do about my dahlias?
CW.  Once the frost has bitten them, cut the black stalk off, lift them, turn them upside down and allow the tubers to dry off. That normally takes around about two to three weeks, then I just put them up in trays and put some multi purpose compost around them. Keep them ticking over in a frost free greenhouse, then start them again in spring.

And what about bush salvia. Got any tips for those?
CW.  I actually cut the plants in half. I pot them up and put them in a cold frame that’s situated at the base of a south facing wall and they’ll survive all right.

Ah, right. That’s good to know. I’ll pass that on to my mum. That question came from her.

What kind of gardening do you prefer? Flowers or veg?
CW.  I’m both! If I was to be put up against a wall and someone said, veg or flowers, I would have to say veg because I like eating! It’ll have to be me veggies!

Over the past couple of weeks we’ve been neglected the TTG  allotment, it has to be said. This is mostly down to the fact that the council stop their allotment inspections from November to March, so the pressure is off. I thought I’d put my feet up for a few weeks, without the threat of eviction. There are plenty of jobs I should be doing now though, aren’t there?
CW.  So there’s the general tidying up, the cutting down of raspberries, making sure the autumn digging, if you are on a heavy soil, needs to be done this time of year. PH testing is a good thing to be doing this time of year. In the flower garden it’s tidying it, cutting back all that stuff that’s likely to go manky, keeping stuff that’s got good seed heads on it so you’ve got good structure and you’ve got material there for your birds. Don’t clear everything away from under your hedges because you want your hedgehogs to be fine. There’s plenty of jobs. And if you are quick, there’s just enough time to plant some hardy annuals.

You’re from Lancashire, right? So Yorkshire has a rhubarb triangle… what have Lancashire got to offer? What can they bring to the table?
CW.  What? In terms of veggies? Potatoes. The Ormskirk area, historically, was big for growing potatoes.

Apologies. What an unfortunate question to ask…
CW.  No no! Do you know, it’s not, because in many ways it’s a great tribute to him because it’s ten years since ‘Christine’s Garden‘ and people still ask me on a regular basis about Reg, and what a phenomenal tribute to him. It doesn’t bother me that people ask me about him because I think, how nice, and how kind.

How’s your diary looking next year? Are you nice and busy?
CW.  It’s fine, I’ve got loads of stuff on. I mean, touch wood, I get used and people like hearing me chat and going and doing things and the rest of it, so yes! I’m quite lucky! I’ve got about 40 dates booked for next year already.

If people wanted to go and see you at any events or talks or suchlike, they can check on your website?
CW.  Yes, they can go on there. It’s www.christinewalkden.com

Yep? What about blight? Wouldn’t you be worried about blight**?
CW.  Not on a desert island! Come on! It’s dry! Acquire your horticultural knowledge, sunshine! (Laughs)

And this is one of the reasons why I should be going to one of these garden groups, isn’t it?
CW.  (Still Laughing) Well, we all have things to learn…

And finally, after a hard days graft in the garden, what drink would you reach for?
CW.  Oh, whisky….yes.

To find out more about how to become a Local Hero, contact your local growing group, email localheroes@farmgarden.org.uk or visit www.growingtogether.community.

The campaign wants to inspire people to do something that benefits community growing projects by taking simple actions–such as buying produce or subscribing to a veg box scheme, taking their children to events or workshops, offering skills as a volunteer or getting local businesses involved through sponsorship, staff volunteer days or discounts on useful equipment.

*Reggie was Christine’s neighbour who frequently appeared on her 2012 BBC series, ‘Christine’s Garden’. He was a convivial old chap who used to pop round for chats and cups of tea.

** In my defence, I was imagining a tropical desert island – the type covered with mangrove swamps and snakes as thick as telegraph poles. I’d plant my veggie garden in the steamy interior, leaving any dry expanses of ground free to build a giant SOS sign out of bleached animal bones and conch shells. 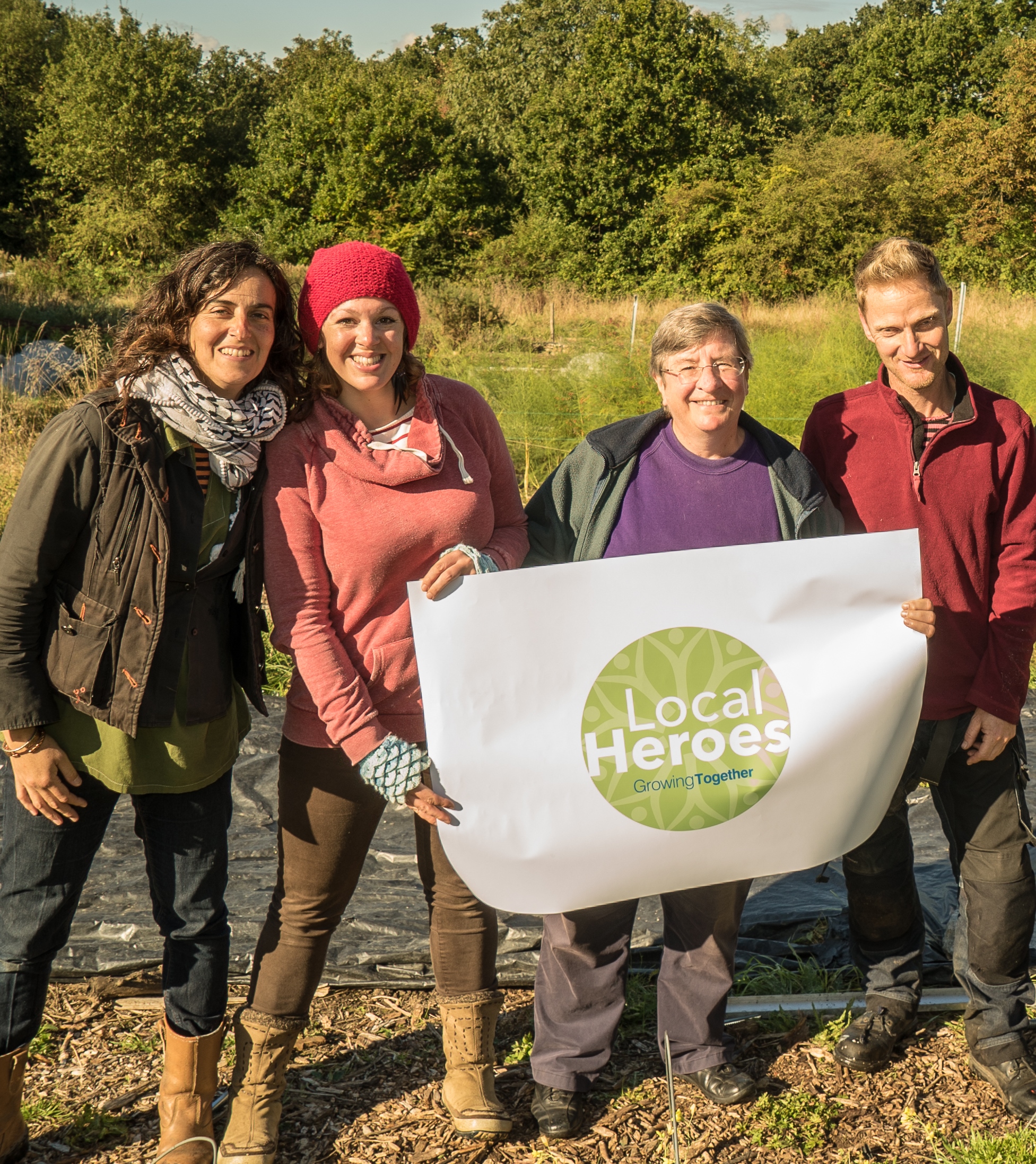