Among the show gardens at this year’s RHS Chelsea Flower Show will be the ‘Garden of Potential’, an ambitious creation by show debutant Propagating Dan, the professional name of Daniel Bristow. We find out a little more about the ideas behind his garden, including plans for a balancing act with a five tonne glacial boulder…

Despite your design company being fairly young, you’ve already landed a show garden slot at Chelsea this year. How did that come about?
​It is an amazing opportunity, but I’m totally confident that we are ready! It feels like the unlikely fusing of lots of seemingly unrelated strands of experience that I’ve gathered over the years. I’ve been a tour manager for bands, an art studio technician, a graphic designer and started out in horticulture as a jobbing maintenance gardener. My first garden design was a tiny front garden in Peckham seven years ago. Since then we’ve moved on to larger-scale private projects – a huge public commission 10 floors up on the roof of a multi-storey car park and most recently we have transformed the grounds of a Buddhist centre in the Austrian Alps. We’ve designed over 100 gardens so we’re young but pretty prolific!

You also look like you’re jumping in at the deep end with an ambitious design. Tell us about the influences behind it.
​I’m quite the magpie, taking tidbits of inspiration from all sorts of sources. They generally don’t come from other gardens! In this design I’ve been inspired by the inherent energy in precariously positioned boulders in nature, plants thriving in the incessant misty blasts of Icelandic waterfalls and tightly clipped lurid Leylandii blobs often seen in suburbia. I feel naturally drawn to eastern ideas of interconnectedness and there’s even a nod to the untranslatable Japanese notion of wabi sabi.

The main focal point of the design i​s​ a five tonne glacial boulder balancing on a pavilion. What’s the story behind that and how do you plan on pulling it off?
T​​he​ wonderful​ refrain “rocks are slow life” from a Super Furry Animals song​ has stuck with me for over a decade​​ (the song Slow Life is itself amazing too)​, and​ I’m intrigued by​ the way that boulders are revered in other cultures​. They are imbued with ​the touch of a deity, for their sense of presence​ or just their physical characteristics. I love the idea that rocks are the teeth in the earth’s skeleton, the only visible part of a vast structural network. I grew up near Snowdonia so it seems only right to borrow these boulders from there. The five-tonne one topping the roof will certainly be a challenge. It’s got a hint of the absurd, but I wanted to force a different conversation, one where the rock assumes its (to me) rightful position.

The design also includes some plants which might come with the tag ‘controversial’. Tell us what plants we can expect to see and why you’ve embraced them in your garden.
We’ll be using Horsetail, Veratrum, Lily of the Valley, three different Ophiopogon, an incredibly rare Birch and Leylandii, along with around 70 other species. I like to try to judge plants or materials on their aesthetic (or also olfactory, auricular) ​qualities. I really dislike the stigma that comes with certain plants, including fashions and even class issues that can accompany them. I mix plants that were fashionable ten years ago with ones that were in vogue during the 60s, or even in the Victorian times.  This hopefully blurs the trend-led nature of lots of garden design, and will lead to the maturing of the gardens I’ve built, rather than the wasteful ripping out after ten years when it seems passé. As for horsetail, I completely understand that it is a little horror where it pops up in the allotment, but in the wild it is stunning. You have to admire a plant that has brushed against dinosaurs and has survived every climatic onslaught ever since.

What do you hope visitors will get from the experience of seeing your garden?
​I am open to all sorts of interpretations or responses, but I hope that it will ​cause pause for thought; a moment’s contemplation. I’d love it if it feels fresh and vibrant, and at the same time, calming. There will be plenty of ‘plantsman’s’ plants in there for the knowledgable, but hopefully also a not-necessarily expressible piquing of interest from the uninitiated. I’d like it to feel accessible to all, so that ideas or bits of it can be taken and used in any size gardens.

And what are you most looking forward to from your Chelsea debut?
​I’ve visited the show a number of times, on the first occasion jumping the fence and landing in a pile of bark chips.​ I’m very excited to be there legally and showing my debut show garden this year. To me, the Chelsea Flower Show is the Turner prize of garden design, or London Fashion Week. I’m really looking forward to getting my ideas over to a wider audience, and I’m really interested to see their reactions and feedback.

Your company has already gained some impressively creative commissions, including designing for artist Gavin Turk, working in a Buddhist Centre in the Austrian Alps and creating a dry roof on a multi-storey car park. How do you tackle such a wide variety of projects?
​I absolutely love a difficult brief! The more restrictions, the better! That’s why I did graphic design for my degree instead of fine art – I needed parameters to work within (or sometimes break out of) – I always found a blank sheet of paper quite daunting. I must say, the garden for the Buddhist centre provided a new climatic challenge, being under two feet of snow for months, then 30 degrees in summer. I had to research my plants carefully, but I relish any excuse to widen my knowledge or read local floras. In various briefs, I’ve been given courtyard gardens with no sunlight, roof gardens with no irrigation, a ‘corridor’ of a garden and a tiny front garden where we’ve packed in a socialising dining space as well as hiding three wheelie bins out of sight, among the planting.

What have been the main lessons you’ve learnt about garden design?
​To me, the most important thing is that I have a working knowledge of the plants and materials that I’m using​ in my designs. I started gardening weeding out Oxalis bulbils and Green Alkanet, and saw the changing of plants through the seasons. I learned the virtues and drawbacks of each species and cultivar, and slowly built up a palette of plants that work all manner of situations, aspects and soil types. I always do three designs for each client, as there are so many variables, even despite tight briefs, and I find that this can really make it obvious which style or layout works best. Visually utilising the borrowed landscape is vital, ie neighbours trees, walls or hedges, so that we’re taking into account the context of the garden. Being bold!

What other future projects can you tell us about, and what do you hope to bring to them?
We’ve been commissioned to design the wrap-around garden of a corner house in Peckham, where the owners are adding a beautiful extension. We’ll be working with the RIBA award-winning architects and bringing it to life late next year. The clients are interested in Victorian ironwork and lighting design so we’ll be working those aspects into the various spaces within the garden. There’s a mature six-metre tall Buxus tree that is just asking to be topiarised! I’m getting married five days after Chelsea finishes, and we’ll be off on a plant-hunting honeymoon through central Asia and hopefully the Tien Shan mountains of Kyrgyzstan – does that count as a future project?

Finally, what would be your ideal way to relax in the finished Chelsea garden?
I’m envisaging reclining in the bespoke seats of the pavilion with my fiancée, a big flask of off-the-boil ​water in hand, a glass teapot containing some good oolong tea and a china cup, while the summer rain beats down all around, releasing scent from the plants and running into the gurgling rill off the meadow-planted roof. Sounds pretty good to me!

For more information about Propagating Dan’s work, visit his website at www.propagatingdan.com 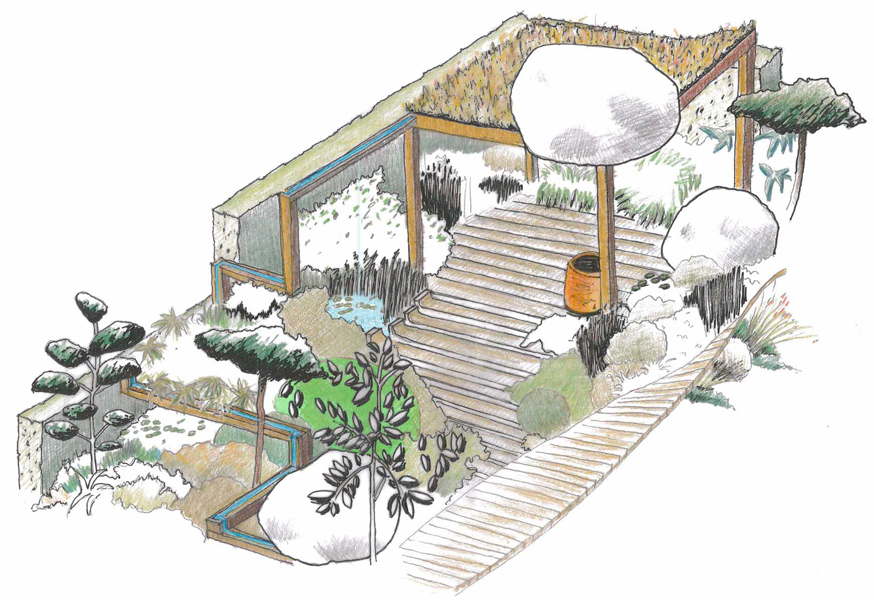