Last Saturday I was sent to Chelsea, to do a bit of work at the RHS Flower Festival. A five hour round trip with a few hours in between being jostled by the masses trying to get a sight of the hottest new lupins on display.

Everyone who has ever been to the Chelsea Show on the Saturday gave me the same warning: avoid unnecessary queuing and expense by packing your own lunch. So into my rucksack went a few corned beef and tomato rolls, a vegetable samosa, flask of black coffee and ginger biscuits. And, for the train journey home, beer.

What beer to choose? It had to come in a can. That’s the rule for drinking on trains.* It should also be light and refreshing. Marching around the Chelsea crowds on a fairly hot May day with a rucksack full of food and booze is a little bit sweat-inducing. Not the occasion for a big fat stout.

Rummaging around my beer collection my eyes soon alighted on a can of Moor’s Nor’Hop. It’s a Bristol beer, so I’m already familiar with its light and refreshing properties. It’s also full of lovely Northern Hemisphere hops and is packed with flavour. I’ve not had the canned version before. But a canned version makes sense, and should be the perfect choice for my travels back from London to the West Country.

When the time came, I pulled the tin from my bag, lowered the train’s plastic food tray, and eased open the ring pull. And seeing as it was a working Saturday decided this would also be a good opportunity to review the booze for a beer of the week. Below are my notes, as taken on the train, with some follow up explanations of those notes. I don’t usually jot down tasting notes in this way but there was something about the train and the plastic food tray that made this seem like the right approach. Anyway, here they are… 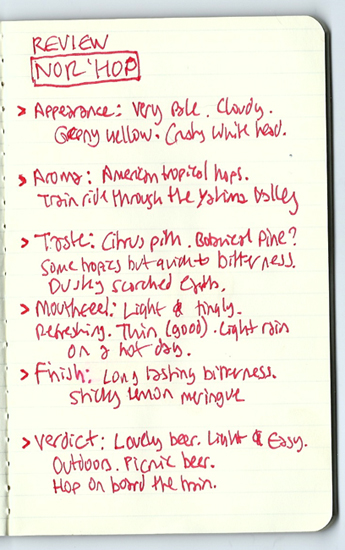 (1) It doesn’t look ‘very pale’ in the photo below, but it definitely is.

(2) And it doesn’t look ‘greeny yellow’ in this photo either, but that might be the visual overload of foliage giving me green tinted views of everything.

(4) The Yakima Valley is where most of America’s tropically flavoured hops are grown. I don’t know if a train runs through it but, if it did, this beer is how I imagine the journey would smell.

(5) First example of me trying to shoehorn Chelsea reference into tasting notes (there were lots of pines on display this year).

(6) Second example of me trying to shoehorn Chelsea reference into tasting notes (arid landscapes were very much this year’s garden design trend). I admit, this may not be the best ever tasting note.

(7) ‘Thin’ is often used as a negative within beer descriptions. It would be a bad thing for a booze-laden milk stout, but can be a good thing for a refreshing pale ale.

(8) Emphasis of thinness being refreshingly good. We all understand what I mean here. Don’t we?

(9) I was left with a nice sticky feeling on my lips, and the overriding taste experience was bitter lemon. The thought of meringues popped into my head.

(10) Lame attempt at thinking of a closing line to a review about enjoying a hoppy beer on a train. This is the main reasons I’ve lazily published my notes rather than write up a review that closes with the line ‘Hop on board the train’… 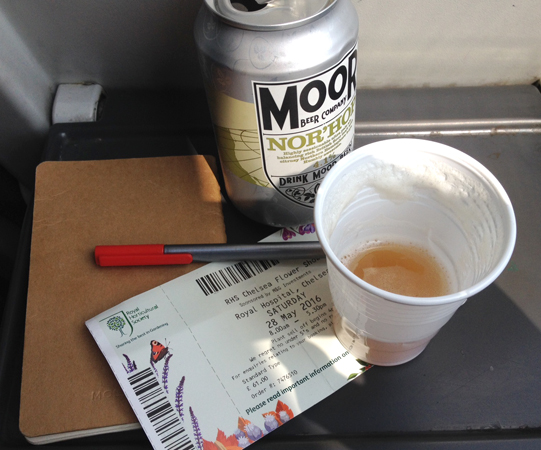 *Unlike the Exeter rugby fans on the outbound train who brought a sack full of Budweiser bottles and got through three each for breakfast before I changed trains. 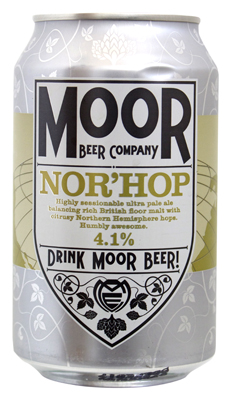