After decades in the beer doldrums, London is once again staking its claim to be the brewing capital of the world. The number of breweries jostling for attention already runs into the hundreds, and is still rising at a rapid rate.

In this ever shifting hop ‘n’ barley landscape, keeping abreast of the who’s who of London brew is a bit of a challenge, so to top up our capital knowledge we’ve taken a brewery tour with Oliver Meade, owner of beer box delivery scheme Craft Metropolis, to reacquaint ourselves with some old favourites and discover some new stars.

And to save money on cab fairs and shoe soles, our trek across the city is conducted from the comfort of our own living room with a hand picked box of 12 bottles and cans from Oliver’s beer army. Let the journey begin… 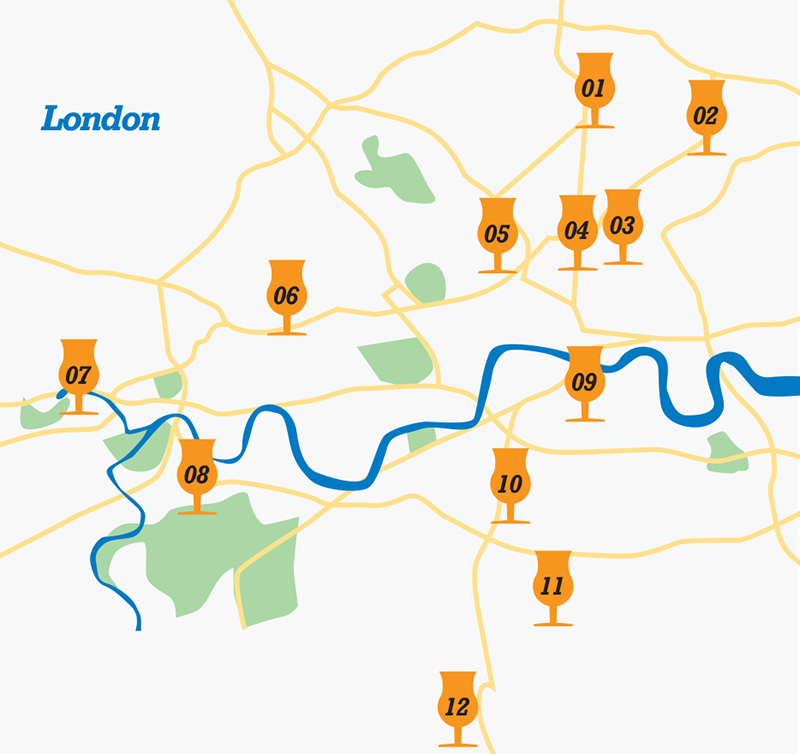 We start our virtual journey in the north of the city at one of our favourite breweries – heck, one of the nation’s favourite breweries – Beavertown. As Oliver puts it “The London brewery that’s responsible for it all. Beavertown brought big flavours to the capital’s craft beer scene in 2011 and has been blazing a rather amazing trail ever since.” 8-Ball Rye is a can we’ve sunk a few times before and one which Oliver reckons “packs all the big flavours you’d expect from the brewery inside an equally bold can.”

Next up another brewery whose wares we’ve enjoyed a lot of, and a style of beer that was once the most popular in all the land: London Porter. Wild Card’s Walthamstow warehouse brewery doubles up as a bar which was voted the year’s best by Time Out magazine. Their porter ticks all the right boxes for the style: chocolate and coffee bitterness, a touch of caramel sweetness, and a dry finish.

With two fine brews under our belt we’re ready to saunter south into Hackney, one of the more congested areas of the London brewing scene, largely thanks to the large amount of railway arches that make perfect locations for small breweries. Pale Fire is one of Pressure Drop’s core beers and Nick is guzzling it with glee, noting that “it’s sweet and chewy with a good depth of flavour. There’s citrus up front, earthy bitterness to finish, and a whole load of beer in between.”

40ft Brewery opened in May 2015 and this is the first time we’ve encountered their booze. “Couldn’t be more East London if they tried” Oliver tells us. “Minimal can design, minimal website but brilliant beer. They only make two styles, including this pale, but they do them spot on. The small set up is spawned from a 40ft shipping container (of course) which acts as both a brewery and uber-cool taproom.”

Shuffling along to trendy Islington and a brewery which Oliver explains is “resurrected from the flames of a site dating back to the 1860s. Hammerton now make great beer fusing old tradition with a modern slant.” We know all about their beer, which is consistently brilliant, including this multi-award winning pale ale. So good that we awarded it a Beer of the Week a couple of years ago.

Heading out west, Oliver introduces us to a brewery we’re not familiar with. Portobello Brewing started up in 2012 with a range of beers all towards the sessionable end of the alcohol spectrum. For this session he’s picked out their strongest beer, a “bracing IPA” at 5.5%. It’s going down well with an intense bitterness springing the senses into life, courtesy of late addition American hops. We’ll be having a word with Oliver about securing some more of these boys mighty fine brews…

We’re big fans of Weird Beard’s creative brewing style, and so is Oliver, so we’ll leave the description to him: “A core beer with big flavour. This IPA is part of the essential range from one of CM’s favourite outfits. Massive flavours, a great attitude and a seemingly non-stop line of different innovative beers come out of this brewery. If you like this big hoppy beast you’ll love the rest.”

We were always going to enjoy a brewery with a gardening connection, and connections don’t come much better than Kew’s famous gardens. Having kept our eye on them for a while we eventually got to sample their all-British-ingredient beers at last year’s Craft Beer Rising and were suitably impressed. This is our first taste of their black IPA, Dahlia, and it’s every bit as good as the rest of their range: tangy hops, well roasted malts and a decent level of bitterness. Nick also notes the curious taste of “tobacco and the essence of a woodland glade.”

Continuing east, on the south side of the river, we reach another of our brewing favourites. BBNo are ace experimenters, constantly changing the hop combinations in their finely crafted brews. This double IPA features Citra, Mosaic and Wai-iti but, as Rich notes, the hops don’t overpower the beer, which is smooth and slick with a ripple of sweetness running through it. Those hops provide lemon and passion fruit flavours while a resinous bitterness chugs alongside, all engulfed in a haze of fresh, strong booze.

From another brewery that started in a railway arch, Brixton’s Atlantic APA was one of the first beers we featured on this site and now Oliver has served up it’s Anitpodean cousin, Pacific APA. And it’s very much our kind of pale ale: bitter from the outset, pine fresh and ready to tackle your tongue with gusto. A hop-made mixed fruit squash gives some refreshing relief for the taste buds so you’re ready for the next bitter mouthful.

We’re scratching our heads trying to recall if we’ve had a London Beer Factory ale before. We definitely haven’t sampled this one, which we’re now realising is a massive oversight. Time for Oliver to enlighten us some more. “Hidden away in SE London as part of Gipsy Hill’s unofficial “brewing quarter” LBF make beers like this: hoppy, cool and canned. The 360 lid* for drinking on the go may seem like a gimmick but the beer certainly isn’t. Expect more than you bargained for in terms of flavour as you pop the top.”

To complete our tour we travel  south to Croydon. What’s the best thing about Croydon, Oliver? “A tricky one I know, but let me steer you in the direction of Signal. They only make one beer – this one – but they do it with intricate detail and attention to quality and purity. They claim to be one of, if not the only, true lager makers in London. A beer that is always a hit with craft beer newbies and veterans alike.”

And that’ll do us nicely. Veteran drinkers, escorted through London’s craft scene by a knowledgeable host. We must do it again some time. Let me check those CM box delivery times…

*Rip open the ring pull and the whole lid comes off converting the can into a pre-filled, handle-less, metal beer mug.

For a chance to win a box of these 12 beers, AND a copy of our book Brew it Yourself, for just £1 enter your details here