It’s ‘experimental brew day’ at the Tomas a Lilford brewery and I’ve been invited to collaborate with them on a new beer. The brewery in Llandow, Vale of Glamorgan – a short drive from Cardiff – creates beers with botanicals used to compliment the staple brewing ingredients, with some of their more adventurous additions including pine, hay, rose and the one I’m most keen to learn more about, seaweed, which features in their stout, Crwrgl.*

I’ve been discussing ideas with Rolant Tomas over email and we’ve decided on a wheat beer with the botanical element provided by either wormwood or calamus root (also known as sweet flag), two of the key ingredients in absinthe and the ones said to be responsible for hallucinatory side effects which include visions of green fairies.** Both ingredients should add varying degrees of bitterness, besides their unique flavours, so Rolant and his brewing partner Rob Lilford have been debating whether to “soften the effect” with some bay leaves which Rolant, rather excitedly, has just discovered are referred to as ‘dail cwrw’ in Welsh, which translates as ‘beer leaves’.

Rolant meets me at Cardiff station on a crisp, clear February morning, which bodes well for a seaweed foraging trip to the coast later. We first heard of this coastal beer from Food & Drink Wales, who are promoting the nation’s cuisine through a ‘Year of the Sea’ campaign, and there’s not much more Welsh than seaweed, an ingredient that is becoming more popular with fancy chefs but has yet to make much of an impact on the booze scene.***

At the brewery, the first task of the day is to stew up some tea with the wormwood and calamus to test their flavours and guess how much we should use in the brew. 10g of each goes into a separate mug which Rob fills with boiling water, handing Rolant the calamus and me the wormwood. Rolant is impressed with his first taste – it’s pleasantly fruity with a pithy orange bitterness – but my sip of wormwood has such an unpalatable astringency that it’s is immediately spat into the sink. The same sip-and-spit routine is repeated by Rob and Rolant, leaving the coast clear for the calamus root to progress to the next stage without its absinthe companion. The bay leaves also get left out, with Rob so taken by the calamus potential that he wants to discover how it fares without interference from the bay. 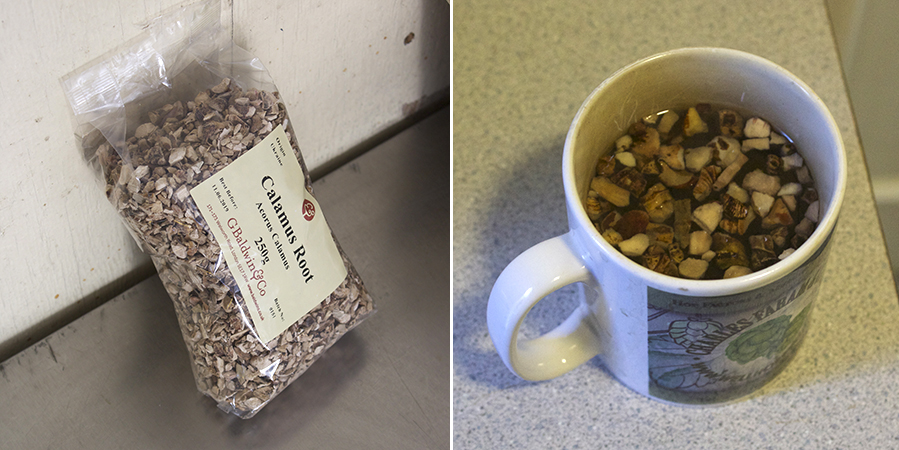 Brewing up some calamus root tea

Today we’ll be brewing 200 litres of beer which, assuming it tastes OK, will be sold at a regular food festival held at the brewery’s business park. Although only a small outfit, the beers have been hugely popular with locals and are starting to get recognised on the other side of the Severn bridge, enabling Rob – a former Chinese medicine practitioner – to go full time while Rolant works one day week, with help also provided by the third brewery partner, Rob’s brother Jim. Rob and Rolant met at their kids nursery, where most of the adults were mums and, as Rob says, “it can be hard to fit in unless you’re able to talk about nipple cream.” So it was a pleasant surprise when not only did another dad show up, but one with a similar passion for beer and foraging.

With the brew underway, Rob takes me to a nearby beach to gather some seaweed, while the steaming wheat is under the watchful eye of Rolant. Two varieties go into Crwrgl – the famous Welsh laver and the common rockweed – which are picked and dried before being added to the brew. Today we’re tracking down rockweed and our beachy destination is a wide rocky strip, backed by a slender limestone cliff, and a lively, spitting sea. It’s not the most challenging foraging trip I’ve ever been on as the shoreline is covered with seaweed, its wet, shiny strands supporting small bladders, lying bedraggled among the rocks and pools. The only harvesting tool required is a pair of scissors to snip the goods free. “As with mushrooms you should always leave the lower part behind, so don’t completely detach it from the rock” explains Rob, who administers a few quick swishes of the blades to fill a carrier bag.

Back at the brewery we’re ready to add our calamus to the hot wort. The whole 250g bag goes in and is joined by the curranty tasting Northern Brewer hops, with Goldings set aside for late hopping. Brewing and foraging is thirsty work, so while the liquid is bubbling away we have a taste of Crwrgl. Rolant likes the effect of opening the bottle to release the unique aroma caused by the seaweed. He describes it as being “like when you’re a kid at the beach, opening the door and getting the first aroma of the sea. It’s that ozone smell.” Rob points out that this smell is caused by rotting seaweed and is, in fact, dimethyl sulphide, but fortunately there’s no rotting whiff to this beer. It has the rich roasted malt aroma you would hope from a stout and and an uplifting freshness which I’m happy to put down to a positive seaweed effect.

There’s no obvious taste of seaweed to the beer either, but that’s not necessarily the point of introducing botanicals to brewing. As Rob points out, “rockweed is quite robust and requires a lot of cooking so, along with the subtle aroma, it also adds to the beer’s mouthfeel.” The laver is much more delicate so is added towards the end of the brewing process. Rolant notes that both seaweeds “add a bit of salt to the beer which helps bring out the stout’s sweetness.”

It’s a delicious stout which I’m a bit surprised is only 4% – the seaweed certainly seems to have boosted the beer’s body and enriched the toasty grain flavours. It’s a punchy brew but very easy to drink. A classic stout that’s both familiarly comforting and indescribably unique. 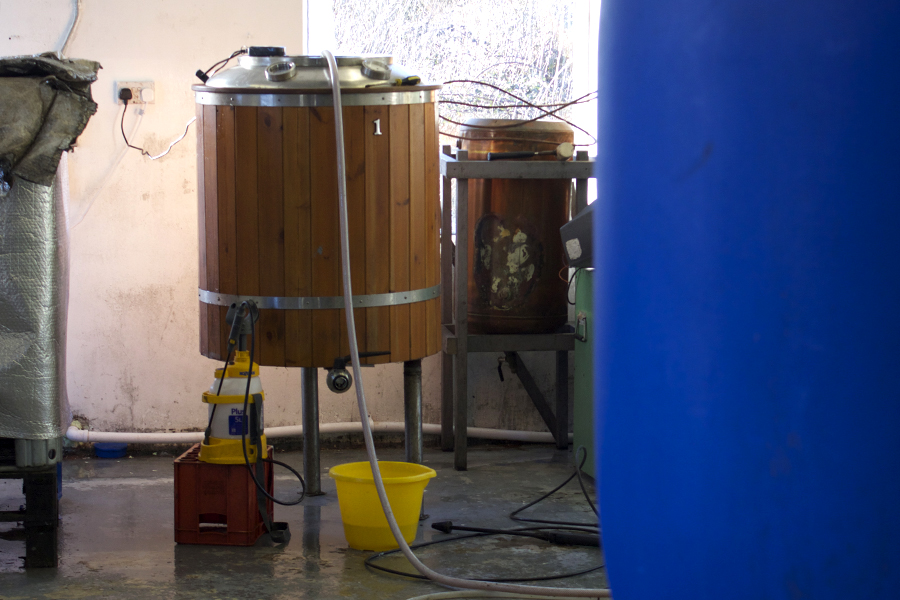 Our strong calamus wheat beer is in that fermenter…

The calamus wheat beer has now finished its boil and is ready to be cooled and transferred to the fermenter, which leaves one decision left to make: what type of yeast to use. A quick dip of a hydrometer to test its strength reveals a stronger-than-expected 9.5% ABV. Rob puts this down to their equipment being “more efficient with wheat” and he opts for a saison yeast that is most likely to cope with such a high amount of alcohol.

And although such an alcoholic brew wasn’t intentional, perhaps a beer using one of absinthe’s famous hallucinatory ingredients was always going to be an especially boozy one. So if you hear reports of green fairies drifting around the Vale of Glamorgan area then you’ll know who’s responsible.

Learn more about Tomos a Lilford brewery on their website www.tomosalilford.com 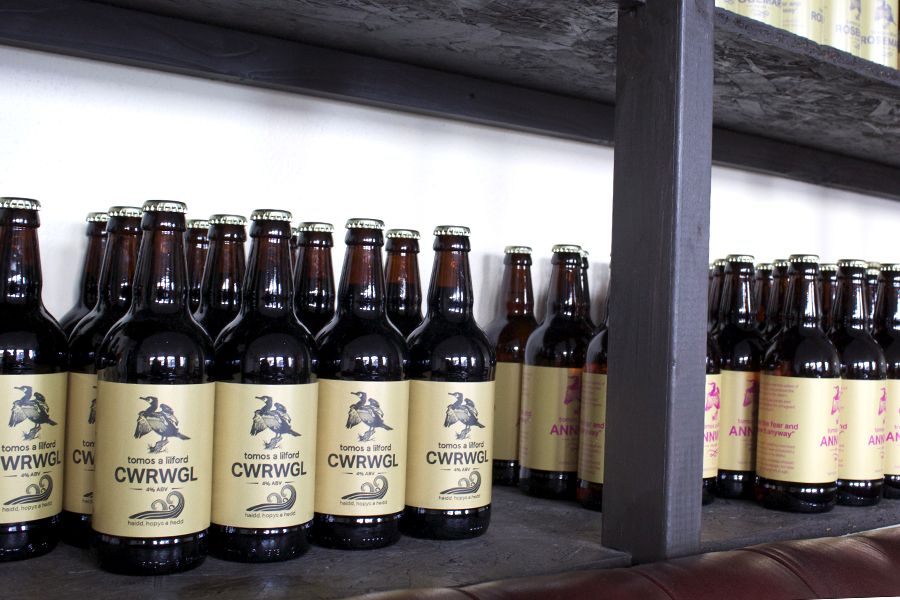 Bottles of Crwrgl lined up in the brewery tap room

*Welsh for coracle, it was first made to celebrate the The Coracle Society’s 25th anniversary. And in a bit of Welsh punnery, crwr means ‘beer’