Have you noticed there now seems to be a day for everything? For example, June 30 is ‘International Asteroid Day’, September 2 is ‘World Coconut Day’ and December 5 is ‘World Soil Day’. Marketeers are particularly keen on World Days when they can tie them in with products they’re promoting, so with ‘World Whisky Day’ looming on May 19 we have inevitably received offers of whisky in exchange for social media activity.

Of these, one marketing scheme stood out: Tullamore D.E.W. Irish Whiskey is big on paring whiskey* with beer and were looking for people to try their blended whiskey with a selection of beers and write about the experience. We like whiskey. We like beer. And we like experimenting, so after a quick exchange of addresses a gift box was quickly sent in our direction.

Tullamore D.E.W. Original describes itself as ‘ the original triple distilled, triple blend whiskey’. It’s produced as a blend of pot still, malt and grain whiskies and is triple matured. The distillery dates back to 1829 and the famous whiskey is named after its creator, Daniel E Williams, who stamped his initials on his distilled booze.

Tullamore produce a range of whiskies including an ‘XO rum cask finish’ and an intriguing sounding ‘cider cask finish’, but it’s the original we’re using for our tasting experiments, a whiskey that is matured in three casks: traditional refill, ex-bourbon and ex-sherry

On its own, Tullamore D.E.W. has a light, sweet aroma with a fresh citric fruitiness that develops on the palette. The sweetness is in the taste, too, within some toffee flavours, while spicy oak notes build towards the finish along with a gentle rush of alcohol. Now on to the beer.

We were sent three bottles – Staropramen’s Czech lager, an Innis & Gunn stout that had been aged in Tullamore D.E.W. barrels and a German Weissbier from Erdinger. Of the three it was the latter that intrigued me most, being a pairing I would never consider, so I flipped the bottle open and began the experiment.

Like all good weissbiers, Erdinger has a good balance of banana and clove flavours along with the crisp wheat base. After a few slugs I returned to my whiskey tumbler and sipped… it seemed strangely warmer and softer than before, calming and comforting, subduing the alcohol and rounding off the spicy oak flavours, which also lingered longer. I liked the effect. Dipping to-and-fro the two drinks was a fun experience… the beer seemed more mature and alive; the whiskey grew in flavour.

One beer and a few servings of whiskey was all I could manage to hit my World Whisky Day deadline, but I’m looking forward to repeating the taste test with the other two beers. And I’m sure some of my own favourite brews will be served in similar fashion before too long.

Did you know that pairing a drop of whiskey with a pint of beer actually has a name? it’s known as a ‘boilermaker’ and was made popular by Irish drinkers who emigrated to America.

Tullamore D.E.W. is available from the Whisky Exchange 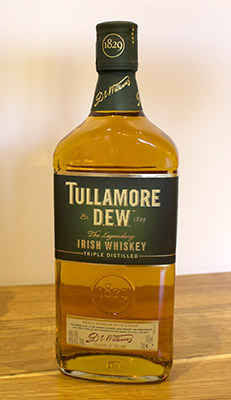