Last weekend I was sent a round metal trellis to review from garden accessories retailer T J Hughes. It’s the kind of product that makes a scruffy garden (like mine) look a bit posher for a minimal outlay (£7.49 at the time of writing), particularly with a climbing plant gripping onto its dark green poles displaying lush green foliage and attractive masses of flowers. Like a rose or a clematis perhaps.

But I’ve got another use for this trellis: runner beans. This year, my veg plot filled before I got round to planting the rambling legume that is one of my favourite veg. So I cast my eyes to the flower border and a geranium that has got out of control, suffocating all other plants that lie in its path (apart from the bindweed). Its vast size, and lack of watering, meant it had collapsed in the middle, leaving an unsightly mess in the border. So it has been mostly ripped up, leaving a space to be filled with my own compost, a handful of alpaca poo, a few runner bean plants and the trellis.

It’s too early for any climbing action but even in its naked form the trellis looks splendid, and that’s despite the slightly lopsided effect caused by a sloping garden and rickety fence that provides the backdrop. And the mess left behind by my clumsy geranium uprooting.

The trellis requires self assembly, although this is so easy that anyone who has ever put up a tent would be able to achieve the job in a flash. Tubular metal poles slot into each other and are secured by simple nuts and bolts (provided). It’s all a bit wobbly a first, but a tightening of the nuts (for which you’ll need a small Phillips screwdriver and a spanner or pliers) soon gives it sufficient rigidity. The poles are hollow and fairly thin, so it doesn’t offer the solid feel of a wrought iron equivalent (over-enthusiastic assembly could lead to a bit of pole bending – one of my rings has a slight kink from needlessly forceful nut tightening) but you wouldn’t get a sturdier alternative at anything like this price. 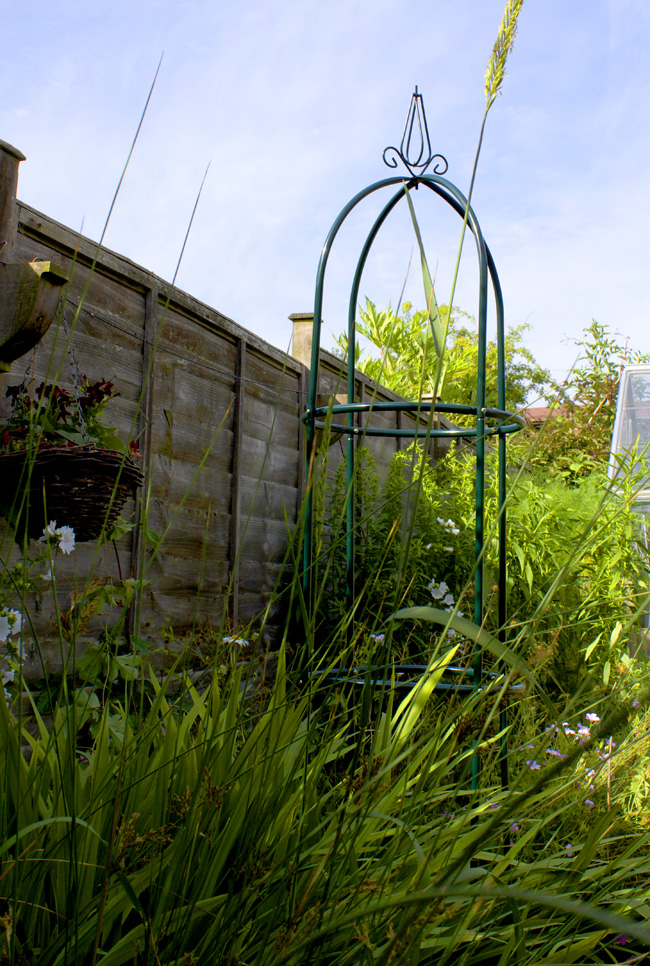 When fully constructed the trellis needs to be sunk into the soil until it feels secure before the plants are dug in around the base. If they survive predatory attacks they’ll be able to shimmy up the four poles and spread around the three rings that lie beneath an ornate, pointy summit.

I won’t get a vast harvest from my beans this year (compared to the much larger wigwam construction I usually build) but the white flowers* of my chosen variety should allow them to feel right at home among the other blooms in the border.