Among our regular writing slots is a column for garden and power tool aces Stihl’s blog, with our most recently filed copy being on the benefits of using plug plants. To illustrate the piece we ordered three packs of plugs from Suttons online store (you get a much better choice online than at any garden centres near me) which included some grafted tomatoes.*

I’ve never grown grafted vegetables before so was keen to see how they would turn out before writing about them and have been so impressed with their initial performance that I’ve decided to spread the word on this website as well.

The plants have been labelled the Tomato Grafted Tutti Frutti collection and contain three varieties – two red cherry types (F1 Red Berry and F1 Cherry) and a cocktail type called F1 Mandarin, which is said to have ‘hints of mandarin’ in the flavour.

They arrived over month ago in good condition, tucked into a plastic growing tray, and were immediately potted up before being planted out in the greenhouse a few weeks later.

What is a grafted tomato?

A grafted tomato is essentially two varieties of plants that have been joined together: the top part is selected for the quality of the fruit, and the bottom part for its resistance to infection and ability to absorb nutrients. In theory, the plants should grow much healthier and bear the kind of tasty fruits you might not get so reliably otherwise.

As a newcomer to grafted tomato growing I’ve been googling a bit more information about the techniques involved but some of the science stuff started to make my brain hurt a bit, so I’ve just extracted this information from Wikipedia instead: “The cultivation of grafted vegetable plants began in Korea and Japan at the end of the 1920s when watermelon plants were grafted onto squash rootstock.” It’s now big business with, according to Wikipedia, an estimated 750 million grafts in Japan in 1998 and, more recently, the Europeans have cottoned on, with over 45 million grafts in Spain in 2003-04. So why has it taken me so long to get round to trying them for myself?

How are they performing?

Back to my own tomato trio and the early results are quite astonishing. They’re growing like tomato Olympians: faster, higher and stronger than anything else in the greenhouse. They went in a few weeks after my much bigger seed sown tomatoes (the variety Black Russians) in the same conditions – directly planted into the ground, under glass, with a mix of farmhouse manure and some water retention granules I found at the back of the shed.

The grafters didn’t take long to catch up to the size of the Russians and now stand at almost twice the height, with good thick stems, healthy leaves and a few sets of flowers already awaiting the attention of pollinating bugs.

Time will tell whether they continue at this impressive pace, and how the resulting tomatoes will taste, but if they continue in the way they’ve started I’ll be back for more grafted vegetables next year. 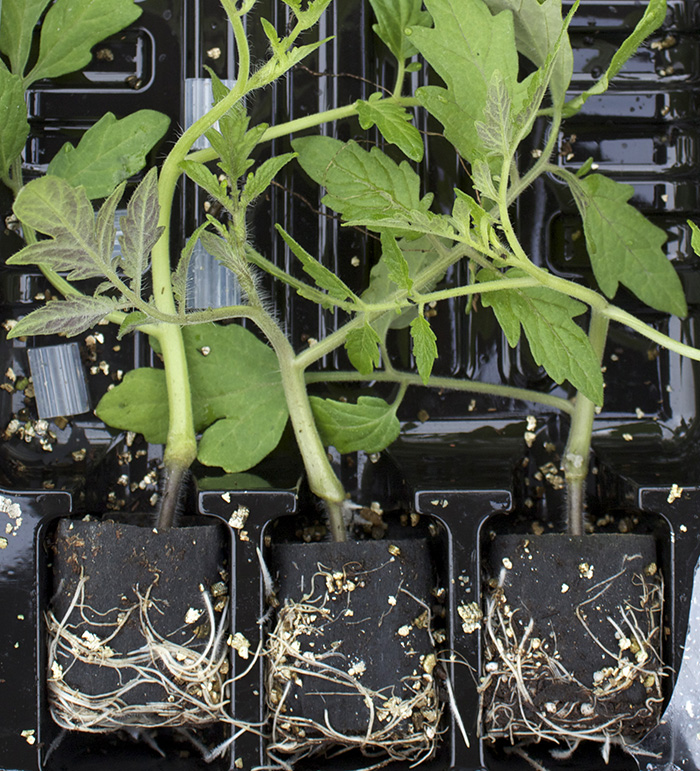