Last summer I was having a drink in a friend’s garden when she leant over to her hedge, plucked a few fuchsia berries and offered them to me. Until this point I had no idea they were edible. I’ve hardly ever grown fuchsias so hadn’t even considered they might have berries that you can eat. But they are edible, and they were rather nice. Thoughts immediately turned to booze…

I’m not sure I want a large fuchsia bush in my garden, so this year stuck a plant in a pot instead as a starting point for some berry experimentations. The plant didn’t grow particularly large* and, whereas my friend’s berries have a slight fruity juiciness, mine were lacking in such tempting flavours and, instead, were dominated by the peppery flavours of the skin. Not horrible, but not particularly appealing for a boozy beverage either.

Following a little research it seems that the different varieties do have varying tastes. According to the excellent Drunken Botanist website it’s the Fuchsia splendens variety that provides the tastiest fruit, suggesting using them in a simple syrup for cocktails as the best way of enjoying them in booze. And having tweeted a picture of my own fuchsia berries Lancashire Mead Co. thought they might make a good addition to mead making.

If I’m going to run some proper fuchsia-booze experiments then I’ll need to plant a bigger and tastier variety or raid someone else’s bush. But if anyone reading this has already tried a few fuchsia flavoured beverages then let me know. 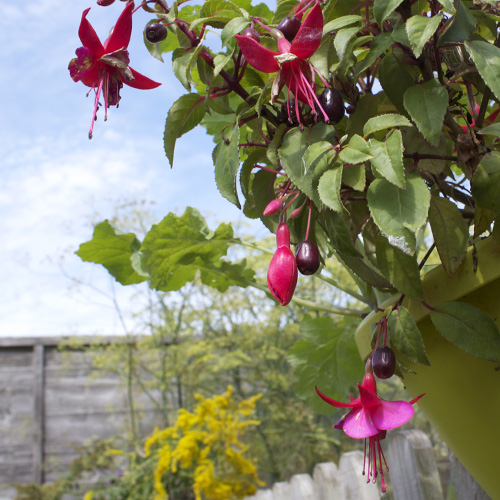