This year, we somehow managed to wangle a press day pass for the Chelsea Flower Show, the golden gilded garden ticket for the hottest hort event of the year. Tickets were scarce, what with the heightened security measures and the slimming down of ticket allocations for riff-raff like us. Fortunately for us, the RHS kindly overlooked the big apple-y MESS we made at last years Autumn Harvest Show, rubber stamped our application and granted us passage through the hallowed garden gates.

Now a press day pass affords the holder relatively crowd free viewing of Chelsea’s gardens, stalls and flowery boulevards, and a nice, empty Grand Marquee to wander around in. It also means celebrities. Which also means there’s plenty of free booze swilling about as the various show garden and stands collective PR machines grind into gear and clamour for attention.

I had initially decided that the professional, responsible way to conduct myself was to try and avoid these boozy bribes and stay focused on the job in hand. Nick had tasked me with collecting voxpops from the various attendees wandering the grounds. For sure, this type of invasive, investigative journalism worked well during last year’s visit to Toby’s’ BuckFest but having surveyed the calibre of celebs* on show, It was evident that I’d require a bit of liquid fortification before awkwardly thrusting my camera upon the gathering masses.

As luck would have it, our pals on the Hozelock stand were handing out cocktails. They had just won ‘Best Show Gadget’ for their remote watering system**, so were ruddy cheeked with success and rather liberal with their drinks measures. By chance, our Cocktail Gardener pal Lottie Muir was on drinks mixing duty, so it would’ve been rude not to partake.

Buoyed with the false bravado that only an enormous Tom Collins cocktail can provide, I selected my first voxpop target and moved in for the kill.

It was Jerry Hall.

Now admittedly she was in the midst of a personal, chaperoned tour of the show, but I figured that as an ex-model she’d be more than happy to pose for a photo. Besides, I’d already clocked that there was no Rupert Murdoch there to wrestle her away from my forward advances.

She shot me a look. A half pained/half piteous look. With the merest hint of rage.

I grabbed another Tom Collins. Nick would have to make do with some close-up pictures of plants and bloody well like it.

Time was tighter than Lycra (see below) thanks to a combination of unfortunate train cancellations and a tube map ‘misinterpretation’, so I just had time for a few circuits of the showground before heading off back to Padders. Here’s my Chelsea ‘Magnificent Seven’ 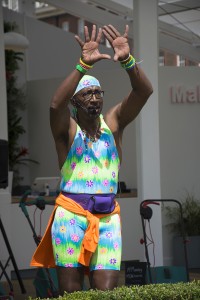 1. The Bosch Stand
Chelsea is nothing, if not eclectic. One minute I’m enjoying the tranquil delights of Jo Thompson’s Chelsea Barracks Garden, seconds later, I’ve got a hyperactive explosion of rainbow coloured lycra bursting RIGHT IN MY FACE. Especially for Chelsea, Bosch had dug up 90’s fitness legend Mr Motivator (he’d been stored in a cryogenic chamber, buried deep underground on the site of the old GMTV building), awoken him from his frozen slumber and rebuilt him from parts of an old Bosch mower. Behold Mr MOWtivator! Working the crowd! Making them sweat! PR Genius.

2. St. John’s Hospice Garden – ‘A Modern Apothecary’ by Jekka McVicar
Jekka’s garden was a curvy, herby oasis, designed to highlight the relationship between health and nature. Featuring arches of hops, apple espaliers and drifts of medicinal plants, it was calming, scented, and reflective. In fact, the polar opposite of Mr MOWtivator. 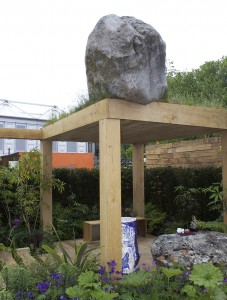 3. ‘The Garden of Potential’, Propagating Dan
This garden was a health and safety nightmare; the focal piece being a five tonne glacial boulder perched atop an oak pavilion. Incredible to look at – from a distance. There was no way I was going to stand under that rock. Dan also sent RHS judges gnawing their nails with his cavalier use of ‘mares tail’ in the planting scheme. Looking forward to seeing his bindweed/knotweed borders at next year’s show. 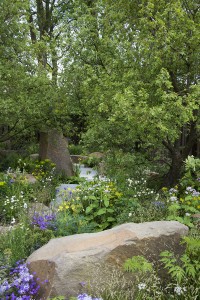 4. The M&G Garden, by Cleve West
I’ve been in awe of Cleve, ever since Joe Swift told me he had THREE allotments. He’s also written a great allotment book called ‘Our Plot’, which is a compulsory purchase for anyone interested in veg. Good old Cleve. His Chelsea garden was inspired by the oak glades encountered on his own childhood adventures on Exmoor. It reminded me of Dan Pearson’s 2015 garden, but with a sharper, contemporary edge – smooth, milled pathways offset the naturalistic woodland planting and gnarly, stunted oaks. Cleve’s great. I love Cleve. 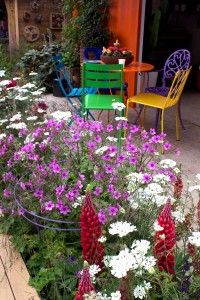 5. RHS ‘Greening Grey Britain’ Garden, by Anne-Marie Powell
Demonstrating emphatically that there are better ways to treat a front garden than covering it in tarmac and sticking it on JustPark.com. Anne’s garden was a riot of colourful meadow plants and edible blooms, with a vivid orange shipping crate taking centre stage, serving as a shed/champagne bar. Anne’s garden was by far the most raucous garden on the site, rammed to the borders with booze-swilling guests. Was too scared to venture onto this garden. 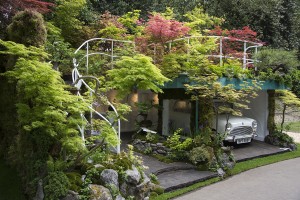 6. ‘Senri-Sentei Garage Garden’, by Kazuyuki Ishihara
A garden car-port seen through the eyes of Gerry Anderson. This Tracy Island inspired, altar to the automobile featured red acers that added hot highlights to the sublime, aqua, white and green colour scheme. The curved bannister stairs and porthole windows of the garage echoing the styling of the 1960s mini that nested neatly within. 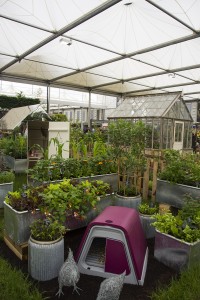 7. Allotment Gardens, Pennard Plants
Pennard Plants had dug themselves a nice plot in the Great Pavilion, a three-stage, envy inducing exhibit with military precision rows of pristine veg. The plants on show were impeccable – ne’er a cabbage leaf kissed by the lips of slug nor brassica nibbled by furry mammal. (Thinks about the skeletal remains of the cabbage plants that reside in the allotment. Cries)

No wallflowers here, just a selection of fine, upstanding Chelsea celebs, papped for your perusal.

*Vanessa Feltz, someone from Strictly, a bloke from Downton Abbey, a French chef. And others.
**Never ones to blow our own trumpet, but PAAAAAARP!, we had already tested it out WEEKS ago for the Independent and knew it was a fine piece of kit.