In our previous BOTW, Rich announced to the world that I was away on holiday, alerting beer loving crooks to an empty house, unguarded by my ferocious hounds. Fortunately, the internet’s most criminal minds have been too busy plotting a course to the vast riches of Kim Kardashian’s diamonds to trouble themselves with my stash of beer and, on return, the door to my booze safe remained untouched.

My week away was in the blissfully peaceful Pembrokeshire village of Abercych, a place seemingly untroubled by modern life’s supposed essentials, such as internet hubs and phone signals, so I was unreachable by friends, family and pestering PR companies. And for some mystery reason the stone walls to our holiday house also possessed battery weakening properties, rendering my phone dead for most journeys away from our remote base.

After several days enjoying no communication with the outside world, I realised our neighbouring pub, the Nag’s Head, had a fully functioning Wi-Fi. Suddenly it became imperative that I regularly strolled down the hill to the boozer to check vital work emails. And it would be rude to take advantage of their telecom triumph without, in exchange, purchasing their beer.

The Nag’s Head is a proper village pub, attracting a friendly mix of locals and tourists, serving quality food with a range of well-kept, local ales. The pub’s owners, Tracy and Steve, have only been running the show for 12 weeks but have already improved it from my previous visit a few years ago.

Back then, its main appeal was the stuffed “Giant Rat of Abercych” which some time around 1950 rose from the nearby river Cych to terrorise the villagers before being cornered in a garden, caught, and mounted on the pub wall.*

The pub also contains a brewery, but this has been sadly dry for over five years. Steve is planning on learning more about brewing in order to get the mash tuns bubbling once more. Until then, it’s other local breweries whose drinks line the bar. 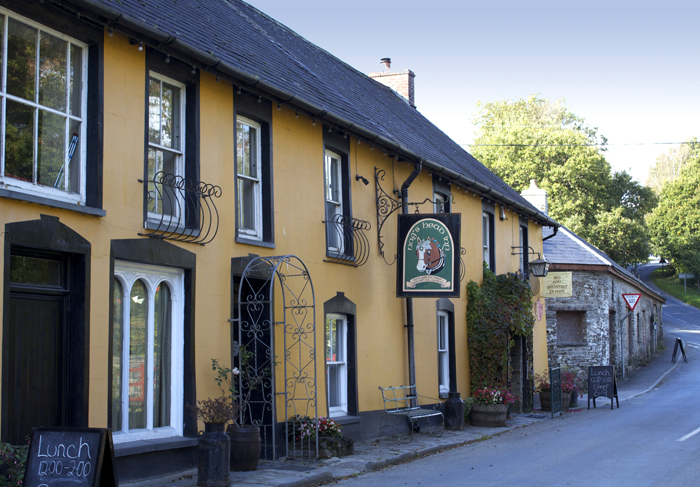 During my stay, Cardigan’s Mantle brewery had two ales on offer, alongside a third lovely American-style red ale from nearby Newport’s Bluestone Brewing Co. before being replaced with a mighty fine bitter from the Gwaun Valley Brewery. My preferred beer to sup while pretending to check those work emails was Mantle’s Cwrw Teifi, a traditional brown bitter. ‘Cwrw’ is one of the few Welsh words I’ve temporarily managed to learn (but still can’t pronounce) and translates as ‘beer’. And the Teifi is the impressive river that cuts through the dramatic Welsh scenery delivering giant rats to the Cych tributary on its journey to the Irish Sea at Cardigan.

I’ve always found Welsh bitters have similar properties to them. This is likely to be caused by something in their soft water, but probably also down to local brewing practices. It’s not necessarily a property I can easily describe so could equally be context: breathing in that fresh Welsh air is bound to have an effect on how the human senses operate.

Cwrw Teifi definitely tastes Welsh to me, but it has a much fuller flavour than the Welsh bitters I’m used to. There’s a fruity tang to the malt and well rounded bitterness to the finish. No trendy tropical hops; no crisp pale malts; no funky yeasts. This is a proper, old school bitter, with the flavour confidently turned up a notch as a welcome concession to contemporary beer tastes.

A few miles down the road the Teifi ratchets up the power through a series of small waterfalls at Cenarth. There are a few more tourist conveniences in Cenarth, including tea rooms, mobile telephone signals and a Nisa store tacked onto the village service station. Unlike most of the bigger stores in the bigger towns, this Nisa sells a fantastic array of local beers, including bottles of Mantle’s booze. I stocked up on more of their range, along with bottles of the Teifi bitter, denying the dogs some tail-room in the car so I could take them home with me. They’ll come in handy for holiday reminiscing when modern working life becomes too stressful. Providing Rich doesn’t inform the world when they’re at their most easily thieveable.

*Some of this might be embellisment, and the Giant Rat turned out to be a coypu…