When he’s not strutting the stage, sending folks knock knee-ed with his New Romantic balladry, Tony Hadley loves to mess with a mash tun. He used to own a brewery – he’s just launched his own IPA. We sit down with the suave Spandau Ballet frontman and talk Moonstone IPA, cider houses and the performance enhancing properties of port.

How hands on were you when it came to developing the IPA?
I always knew exactly what I wanted. I spent a lot of time at the brewery and worked with the Master Brewer there, Alan. He’s absolutely fantastic and really understood what I wanted. A beer called Little Creatures from Australia was a reference point. I love going to Oz and it’s one of my favourite beers. The team at The Great Yorkshire Brewery, including Jo Taylor, worked hard to help me create my vision and it’s turned out fantastically.

There’s a fine selection of beers on offer during Nicholson’s Beer Showcase celebrations. Have you got your eye on any in particular?
I’ve tried a couple like Truman’s Zephyr which is a nice beer. I prefer much lighter beers but I have been drinking my own beer, the Moonstone IPA, in nearly every pub. I do like trying other beers and often at the brewery we’ll get in other London brews and have a taste test of what is good or bad. I enjoy that because you want to know about the competition.

Do you have any memorable booze experiences from your life on tour with the Spands?
There’s not really any memorable booze experiences when you are on tour because most of them are so heavy that you can’t remember what you did. There were moments of complete madness. As a singer I had to be disciplined because the shows were two hours and there is a lot of heavy singing. So, inevitably I was the guy in the band who went to bed every night, getting his eight or nine hours sleep while the others were out nightclubbing and going completely crazy. But when I had a couple of days off that was dangerous. That’s when I was assigned a minder or someone to look after me and ghost me all night because I would go absolutely mental.

You are famed for your silky vocal delivery. My band-singing mate was once advised to take up fag smoking to achieve an authentic rock voice. (it didn’t work). Would you advocate the drinking of booze to coat the larynx prior to gigging?
Smoking will not give you a rock voice – you’ve either got it or you haven’t. I used to smoke and it’s the most stupid thing I ever did. I’ve given up for many years. In terms of drinking, there are some singers that will not drink before a performance. Normally when we’d go to a town or a festival, we’d try and hit a pub and get a couple of beers or a glass of wine with dinner, and then I gargle with port. It’s a little trick of an old opera singer. You do not drink it; you spit it out. It clears the voice and it’s nice. I never drink too much before I go on stage because you want to be sharp. You have to be. We always find a local pub before we go on, unless it’s a festival and you can’t get outside. When we were in Newton Abbot in Devon we got smuggled out of the racecourse and we went to the cider house; it’s just cider and I love it. It was like going back two hundred years and all they had was barrelled cider. That was dangerous because it was before a gig.

Do you have a favorite pub?
My favourite pub in London would be the Red Lion and Sun in Highgate, where my son is working at the moment. It’s a cracking pub, we’ve had some good celebrations there. There are some great pubs where I live in Buckinghamshire: The Mole and Chicken, The Seven Stars, The Crown, The Hundred. There’s several great pubs so we are spoilt for choice. The Bottle and Glass is another good pub.

What are your favorite ales?
Apart from Moonstone IPA? Little Creatures is really great from Australia. I’ve been in America and in San Diego they’ve got some great craft breweries. I like Ruddles County, it’s a nice drink. I like anything that’s local. If you go to Italy, you don’t just drink Pinot Grigio; you ask for the local wine. XT beer is great and Chiltern beer is really good.

Who would you most like to share a pint with?
I said recently in an interview that I’d like to sit down and have dinner with Winston Churchill so I would quite happily share a pint with him as well. I’ve just read his biography by Boris Johnson and what he did in his life was incredible: fought in the Boer War, fought in the First World War, Prime minister of this country during the Second World War. An incredible man, just unbelievable. 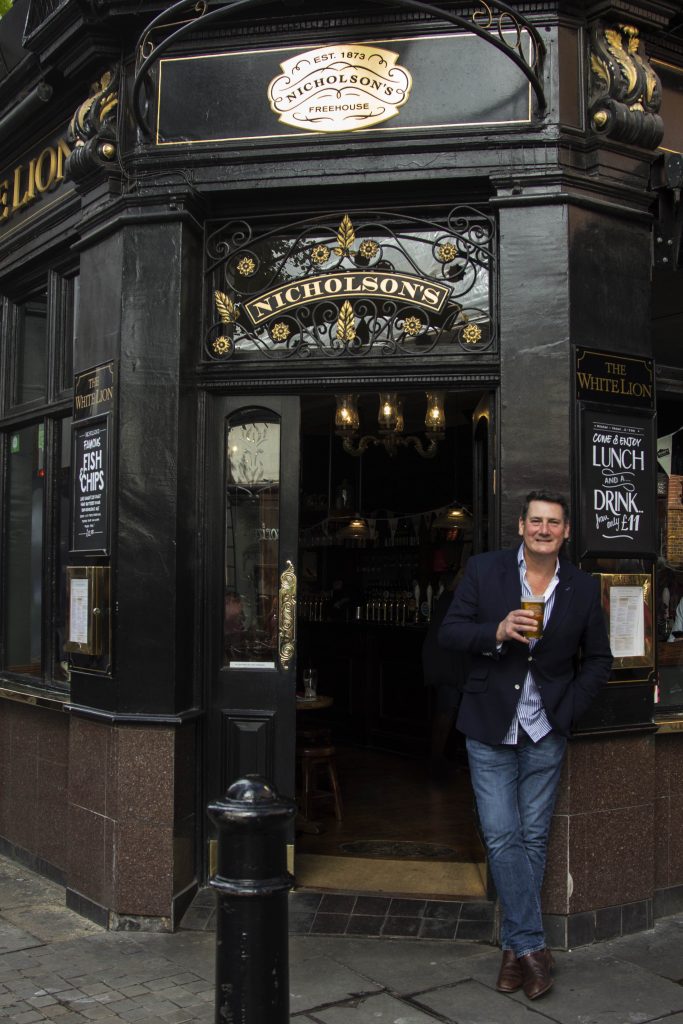 Tony’s Moonstone IPA is on sale at selected Nicholson’s boozers.