If you’re looking to conjure up a classic tequila based cocktail then you can’t go far wrong with a Margarita. It’s a drink that, in its basic form, is effortlessly simple and easy to adapt into all sorts of flavour combinations. For this recipe we’re only straying from the classic in one direction, but it’s a fairly major direction: we’re substituting the main ingredient, Tequila, for Mezcal.

OK, so technically you could argue we’re not deviating from the recipe at all: Mezcal is a spirit made from agave and Tequila is simply a type of Mezcal with restrictions on what kind of agave can be used (blue) and in what part of Mexico it can be made (the state of Jalisco or four other specific regions within Guanajuato, Michoacán, Mayarit and Tamailipas). Mezcals can use any combination of around 30 agaves and are made by a greater variety of production methods so have a wider range of flavours which almost always include some degree of smokiness.

The Mezcal we’ve chosen for our Margarita, Se Busca Reposado, is a great example of the flavours you can find in a Mezcal with an initial almond sweetness to the distinctive agave flavours, some green pepper and spice hitting mid-sip and just a moderate smokiness that wafts through at the finish of our cocktail. Being labelled a Reposado means it has been aged in oak for between two months and a year (in Se Busca’s case that’s 10 months in French oak barrels) so it has a golden hue along with a few mature woody notes. We think this extra flavour works a treat in a Margarita mix…

With even the most simple Margarita recipe, folk will argue over the quantities of the three ingredients. The International Bartenders Association prescribe a rather precise 50% Tequila, 29% Cointreau and 21% lime, but we prefer to adopt easier maths and suggest 50%, 25%, 25%.

Using those sums we’re combining 40ml Mezcal with 20ml Orange Liqueur* and 20ml freshly squeezed lime juice. These ingredients are shaken with a handful of ice and strained into a cocktail glass.** For the full Margarita experience you’ll want to salt your rim: simply rub a bit of lime around the rim of the glass and press it against some salt. A wedge of lime as a garnish completes the piece.

**There is a variant on the standard cocktail glass that is specially for Margaritas. It has an extra bulge below the main cup. We couldn’t find such an item from our regular glass suppliers – the local charity shops.

***I was given some smoked salt ages ago and thought it would work a treat. It didn’t. Unless you think licking a sweaty chain smoker is the ideal way to precede a sip of cocktail. Stick to regular salt instead. 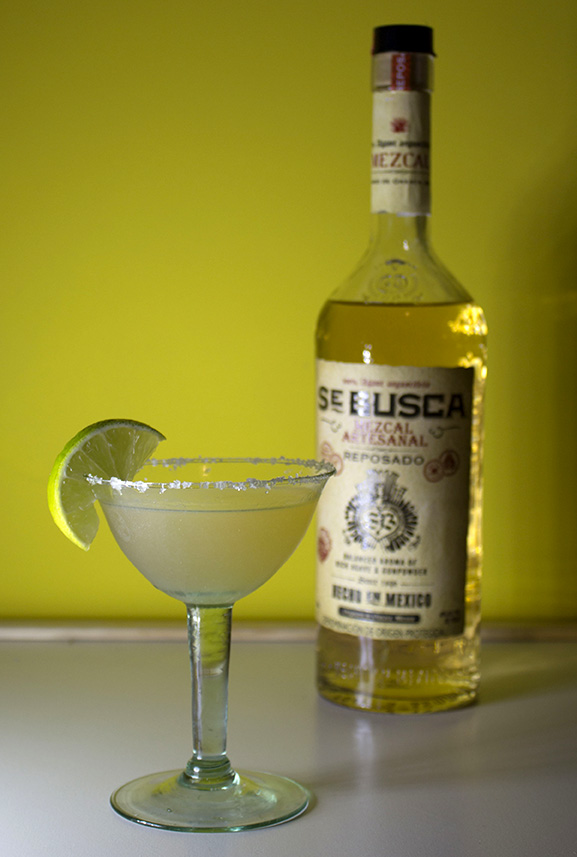