Order a beer in a Belgian bar and it’ll almost certainly come in a bespoke branded glass. Order a Pauwel Kwak and you’ll also get a wooden glass holder,* with the whole assembly resembling a beer filled egg timer that, as the 8.4% contents steadily drain away, counts down to drunk-o’clock.

How you drink from it is up to you. Holding it by the wooden handle can induce clumsy drinking (drunken man isn’t used to the holding-hand being that far from the mouth) but removing the glass also has its perils – the bottom is round so accidentally placing it on the table sans holder guarantees maximum spillage and dirty looks from your Belgian co-drinkers.

So how did this ludicrous beer drinking mechanism come into being? 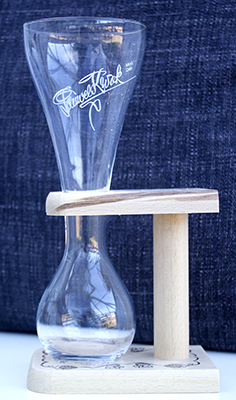 According to the company that makes it, Brouwerij Buggenhout Bosteels, Flemish inn keeper and brewer Pauwel Kwak devised the glass in the early 19th century for passing coachmen. While their passengers stopped off for a sneaky brew and plate of konijn met pruimen**, the poor drivers remained at the reigns to keep an eye on the coach and horses. To allow them to quench their thirst Mr Kwak came up with the idea of a ‘stirrup cup’ that could be hung on the coach in between swigs.

It wasn’t until the 1980s that Kwak beer was launched, and with it the glass and holder went into major production. You could be forgiven for thinking that a beer with such a novelty vessel would be lacking in quality, but this certainly isn’t the case. The Bosteels Brewery dates back to 1791 and their output is of a typically high Belgian standard, with Deus and Tripel Karmeliet their other two excellent beers.

Kwak is a strong amber ale, with sweet bready malts and light bitterness. It’s a rich drinking experience, smooth and comforting, with the yeasty spiciness you would expect from a Belgian ale. And you definitely notice the strength – alcohol is present from the first whiff to the final knee trembling draining of the glass. If you’re in Belgium it’s a must-order beer just for the contraption it’s served in, but make sure you give yourself time to enjoy the beer as well.

*Although some bars may insist you hand over a shoe for a deposit. Especially if you look like a Belgian student.